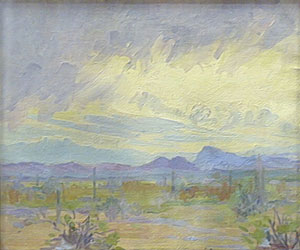 Considered one of the most important Arizona artists of the early twentieth century, Jessie Benton Evans is known for her brightly colored desert landscapes.

Evans was born in Uniontown, Ohio and studied at Oberlin College.  Having moved to Chicago to attend the Art Institute, she met and married Denver Evans, a successful Chicago businessman.  After giving birth to her only child in 1888, Evans completed her course of study with John Vanderpoel, Lawton Parker, and briefly with William Merritt Chase.

Over a period of several years, Evans took her son on extended trips to Europe where she studied informally with artists in Venice, Florence, Verona, Naples, Rome, and Paris.  She exhibited in the Paris Salons of 1911 and 1912 and was a member of the Societe des Artists.  Between 1905 and 1925 she exhibited here landscape and genre paintings at the Art Institute of Chicago's annual exhibitions.  Evans was a member of the Chicago Art Club and the Chicago Society of Artists.

In 1913 Evans moved to Scottsdale, Arizona for health reasons, although she maintained her Chicago studio at least until 1920.  She quickly grew to love the Sonoran Desert, saying she found in it a "virgin freshness" not found in Europe.  She expressed her delight in the desert landscape with vivid colors and an impressionist style.

As one of the cultural leaders in the Phoenix area, Evans undoubtedly sold much of her work privately, but she also sold paintings at the two resorts, Jokake Inn and Paradise Inn, built by her son, Robert.  She also sold thirteen canvases to the Santa Fe Railway, more than the Santa Fe purchased from any other female artist.