James Woodside: Painting at the Ends of the Earth

by John A. Parks

This Massachusetts artist makes paintings that bear witness to his experiences in some of the planet’s remotest locations. 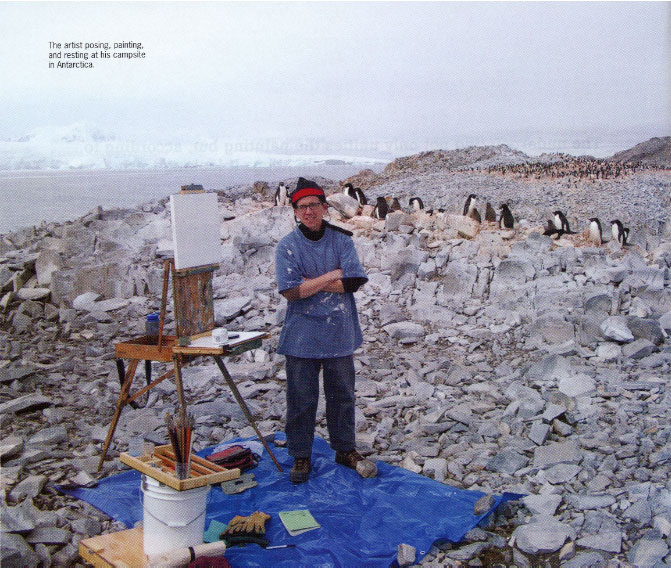 James Woodside posing, painting, and resting at his campsite in Antarctica

James Woodside is a plein air painter who finds himself attracted to remote, spectacular, and historically charged landscapes. Once he finds his subject matter, he renders it with a combination of raw energy and savvy intelligence that allows him to simplify and clarify his vision of the world without losing the physical sense of excitement of being in the field. Despite the geographic isolation of many of his subjects, however, Woodside says that remoteness is not the only excitement he seeks out. “I’m drawn to the drama and history of the landscape,” he explains. “It may sound romantic, but I like to paint in places where the historical power of the place doesn’t feel totally eclipsed by the present. Also, forms that are bold, unique, and undisturbed are a big attraction for me. In short, I need to be inspired by the place itself; perhaps I need to be a bit in awe of it.” 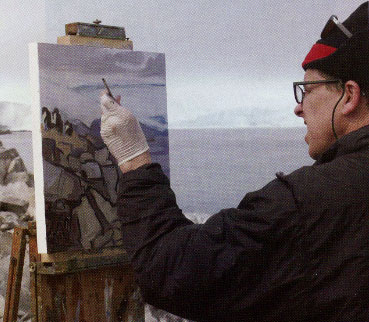 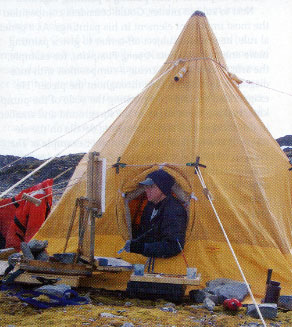 Woodside has traveled and painted widely in North America, but the most dramatic and satisfying of his adventures to date has been his 2003 trip to Antarctica. The Artists & Writers Program of the Office of Polar Programs—a branch of the National Science Foundation—awarded Woodside a fellowship that takes artists to one of the three research stations maintained year-round by the United States. Woodside chose to go to Palmer Station, located on the coast of the Antarctic Peninsula, because he felt it would offer the most varied landscape, along with views of the ocean, icebergs, and a host of unique wildlife. Before making the trip, the artist was concerned about how his oil paint would behave at lower temperatures, as oil becomes heavy and difficult to work with under such conditions. After doing some research he determined that a medium of Gamsol mixed with stand oil would best serve his needs. “Painting outdoors really forces an artist to improvise, anticipate challenges, and problem-solve,” he says. “For example, when I painted in Antarctica I traveled most days in a Zodiac inflatable boat. There was always water and ice splashing in the boat, which could quickly ruin a wet oil painting. So, before I went, I made a watertight box (like a wooden briefcase) that would hold the finished work securely and wouldn’t damage the painting, if tossed around. I also had to make a similar box, which I still always use, to hold my palette and colors.” 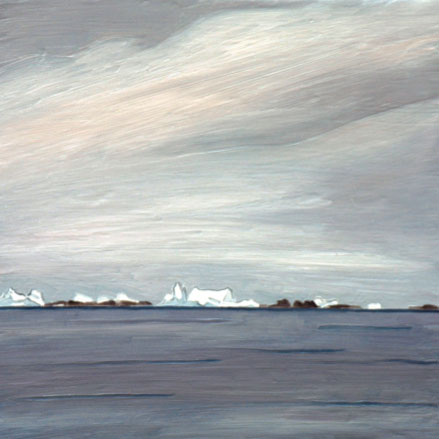 Once he arrived in Antarctica, Woodside found himself both inspired and awed by the landscape. “The views were so extraordinary and strange that I wondered how on earth I was going to be able to do them justice,” he describes. “I found that it was better to begin with some deliberately unspectacular views rather than starting with something overwhelming. In the end you can never make a painting that will be as visually amazing as actually being out there—you can only make paintings that bear witness to your experience. Once you realize that your ambitions for the painting must be limited, you can begin the task with pleasure.” 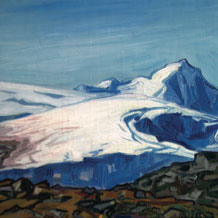 Woodside’s sojourn in Antarctica brought him many wonderful painting experiences, not the least of which was the unusual advantage of having 23 hours of sunlight a day. It also brought him into close contact with a great deal of wildlife. “I once had a lone curious Adelie penguin come into my campsite, look through my stuff, and then come over to my easel to see what I was doing,” recalls the artist. “He didn’t seem impressed. I also once painted on an island that’s a penguin rookery. My audience was 30,000 penguins, and the noise was deafening. The island was appropriately named Dream Island. It was fantastic.” 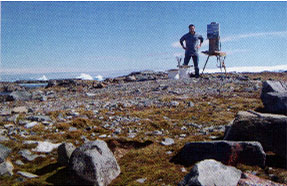 Woodside had to alter some of his materials to help him deal with the harsh environment. 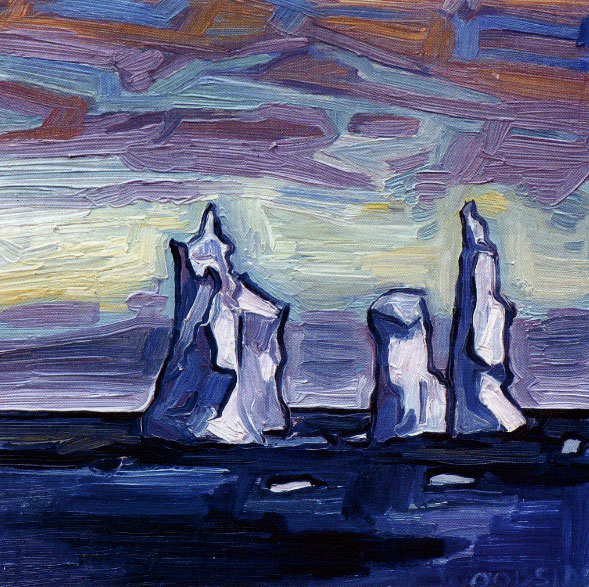 Indeed, Woodside’s paintings of Antarctica summon up a world far removed from our own. In Antarctic Horizon, for instance, a blank sea of steely grays stretches to a horizon on which a line of icebergs and rocks sits. A leaden sky above sweeps right to left and a sense of vast quiet and emptiness inhabits the picture. In Pinnacle Icebergs, three towers of ice rise from the sea, their jagged silhouettes mirrored in an angry, broken sky, as though the whole of nature were conspiring to create the drama. Woodside was also intrigued by the sight of his conical tent pitched out on the barren rocks. In paintings such as Tent at Old Palmer (From Shore) he uses it as a warm focus to counter—and thus highlight—the surrounding desolation. Perhaps the most successful of his Antarctic paintings is Norsel Point, in which a spit of dark-brown rock stretches into a frigid, blue ocean, while in the distance a group of islands and icebergs is backed by an enormous land mass covered in ice and snow. Above, the clouds have parted to reveal an icy wedge of blue sky. The place really does seem endless, frozen, and uninhabited. Forbidding as these landscapes are, Woodside says that he would love to return. “Plein air painting in Antarctica was a sublime and truly special experience for me. It was a dream come true, and I felt incredibly fortunate every moment I was there.” 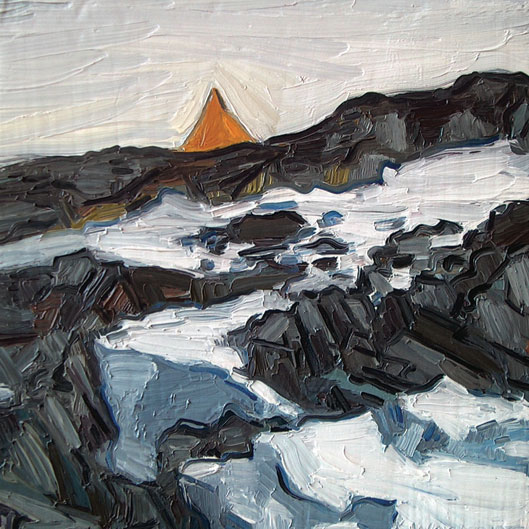 On most of his painting trips Woodside brings along a fairly traditional set of supplies. “I use Winsor & Newton, Rembrandt, and Gamblin paints in various colors,” he reports. “For white, I use Permalba; I love its consistency.” The artist paints exclusively on panels made from Masonite or Baltic birch plywood, which he prepares with Gamblin Ground. “I find this gives me by far the best surface to work on,” he says. “It sands very well between coats and takes the paint wonderfully.” Woodside uses a variety of brushes. “Mostly I buy cheap ones,” he says, “because I’m pretty rough with them and I go through so many. For fine work I like to use the newer synthetic brushes.” Woodside usually paints on a French easel that he’s modified and strengthened. “For much larger and heavier panels I use an old, heavy door as an improvised easel,” he says. “I stick it in the back of my station wagon, drag it out to the site where I’m painting, and lean it up against a tree or a rock. It’s cumbersome and a pain but very effective.” 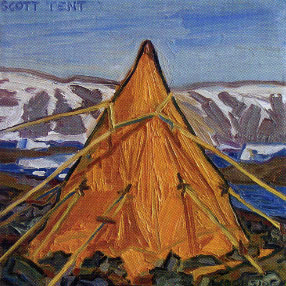 Woodside’s approach to making a painting is at once direct and intense. “I don’t do an underpainting or any preliminary drawings,” he says. “I start my paintings in a pretty loose, quick fashion—editing, choosing forms and details to emphasize, adjusting spatial relationships, and painting fairly thin. I’m usually drawn to a primary shape, object, or form, and that will usually be the starting point for a painting. Sometimes that form remains the dominant element in the picture, but other times different characteristics or relationships within that view—ones I hadn’t been aware of at first—take over and become the focus of the painting. In a sense, I’m trying to distill what I’m looking at into something I can understand, grasp, and manage. As I continue painting and my goals and interests become clearer, the paint gets much thicker and the forms more emphatic and bold. I often continue in this fashion, working wet-in-wet, until the painting is finished.” 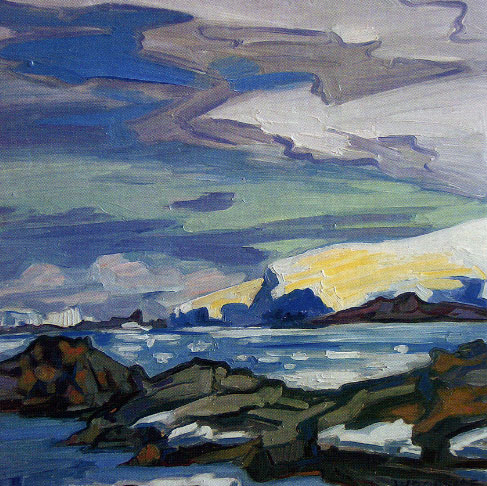 Woodside says that he works fairly quickly and always finishes his work on-site, although sometimes he will continue working on the same painting for two or three days. He has never been particularly concerned by changes in light. “My work isn’t about recording a specific light condition,” he says. “I see my paintings more as composite records of the experiences of looking at and being in a place. For me, landscape painting is a kind of direct personal testimony to the power and excitement of a place rather than a rendition of one particular moment.”

Woodside credits his interest in simplification and graphic clarity to his early artistic training. He studied with Grace Hartigan at the Hoffberger School of Painting at the Maryland Institute College of Art, in Baltimore, and recalls how she challenged students to find their own voices. He was also greatly inspired by the sculptor Salvatore Scarpitta, of whom he says, “Without specifically trying to, he taught me to connect my paintings to the world, to the past, to history, and to the earth. It’s something that has remained with me ever since.” The artist has also been inspired by a number of 20th-century artists, particularly the German Expressionist painters Emil Nolde and Ernst Ludwig Kirchner, whose powerfully simplified landscapes share certain features with his own work. Woodside didn’t take up plein air painting until 12 years ago, at which point he found himself immediately hooked.  “It was quite a revelation and a liberating experience,” he says. “I felt like I could finally see the paint I was using. It sounds silly, but I was just amazed at how clear and accessible the color looked. I suddenly felt like I’d been missing something all those years in the studio.” The artist relishes the fact that being outdoors forces him into an immediate and very physical relationship with his subject matter. “I find that I’m able to simplify impossibly complex forms into straightforward, dramatic shapes,” he explains. “Moreover, the limitations of time, weather, and transportation of material all factor into the ‘genetic makeup’ of the painting. They provide a set of natural parameters for the work that gives it a real authenticity.” 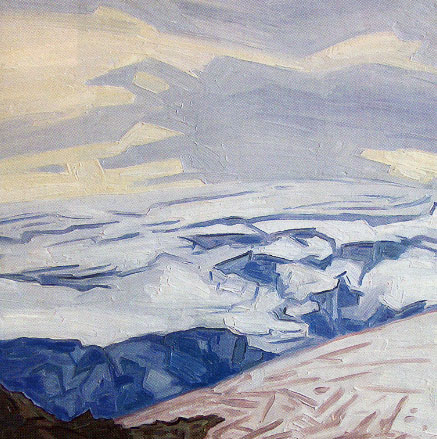 Naturally, Woodside has more adventures planned for the future. “I’m going to try to get farther north in Canada,” he says. “I usually spend summers in Nova Scotia, but I’d like to get up to Greenland or perhaps the Arctic Ocean.” For this artist, the world is an immense and inviting place to paint. 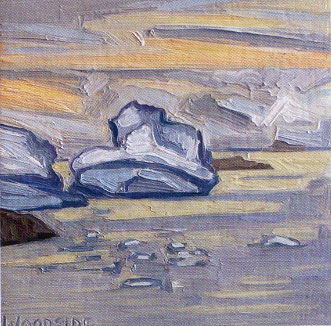 James Woodside studied art at the University of Delaware, in Newark, and at the Hoffberger School of Painting at the Maryland Institute College of Art, in Baltimore. He was also a recipient of a fellowship in the Whitney Museum of American Art’s Independent Studies Program. He has exhibited his work widely over the years, including in one-man shows at the Tatistcheff Gallery, in New York City, and the Bentley College Gallery, in Waltham, Massachusetts. Woodside is currently the director of visual art at Walnut Hill School, in Natick, Massachusetts. His work is in the collections of the National Science Foundation, the University of Delaware, and Fidelity Investments. 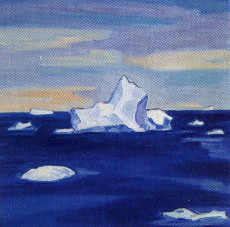