A Cowboy Artist of a Different Sort 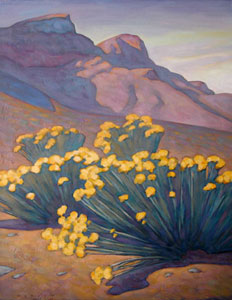 The art of the American west has been primarily an eulogy to a bygone era, one whose mores and lifestyles were shaped by the harsh realities of life in the sparsely-populated plains, mountains and deserts encountered by those who were brave enough to first explore them. The protagonist of this story in the popular imagination is the cowboy, a kind of mythic American everyman for whom a difficult life spent in nomadic toil is a sort of primitive necessity. This character is a continuation of a long line of wanderers in art and literature, and his elemental narrative power has been one of western art's greatest assets.

Howard Post's work stays within the tradition of cowboy subjects, yet his cowboys are of a variety not often seen in western galleries. Post documents the life of the twentieth century cowboy, a life he is personally well-acquainted with. 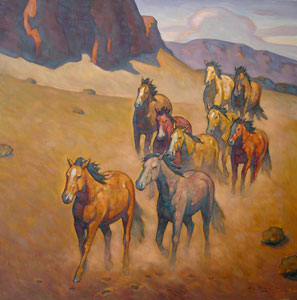 Growing up on a ranch in Tucson, Arizona, Post's family raised rodeo stock, and he eventually became acclimated enough to enter rodeo competitions himself. An accomplished rodeo cowboy, Howard was the Arizona High School All-Around Rodeo Champion, a member of the University of Arizona rodeo team and a competitor with the Professional Rodeo Cowboys Association. As if his ranching and rodeo activities weren't enough, Post received both a B.F.A. and M.F.A. from the University of Arizona, where he went on to teach for two years. 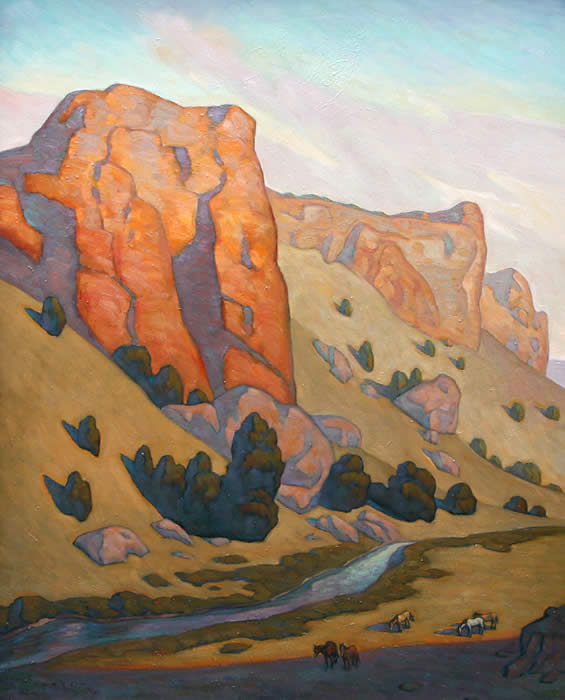 First hand experience was crucial to Post's artistic development, as his familiarity with the more docile and mundane aspects of the ranching and rodeo lifestyle informs his choice of subject matter. His horses are unsad dled and corralled, and his cowboys spend more time sitting on fences than steer wrestling or barrel racing. It is this focus on the broader experiences of ranching and riding that make Howard's work special; his focus is on the inhabitants and sensory experiences of the lifestyle he was born into. The affection he shows his human, animal and inanimate subjects is revealing, opening a door into the work day routines that surround the few minutes of adrenaline by which the ranch lifestyle is popularly defined. Instead of the explosive power of a rodeo bull leaping out of the gates, purple mountains loiter in the background, while empty corrals divide the foreground into tightly-gathered geometric elements. Tranquil, hazy colors merge to form the crisply-rendered forms of the cowboys, horses, cows, corrals, roads and vehicles that populate the small towns and ranches of Post's work. The elements of these compositions are culled from thousands of slides that Post keeps on file, and he begins constructing his canvases without preliminary sketches. In his oil and pastel can vases, colors intermingle, yellows and pinks and greens conspiring to recreate the shifting light of Southern Arizona. 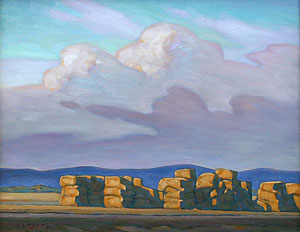 Much like the animals in corrals that are a trademark of his work, Howard shepards these colors into clearly defined shapes, a sensibility perhaps ingrained in him from his years in commercial art. Like many of the leading modern painters of the west, Post is open to integrating the elements of commercial art into his painting, which allows him to embolden his works and create authoritative compositions that modernize the western painting genre. The result is a style of western painting that is distinct in its use of color, shape, shadow and subject matter. Howard Post's work is calm and collected, the steady hand of a talented and self-possessed creator guiding its formation. 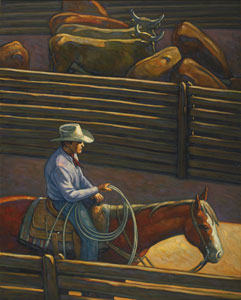