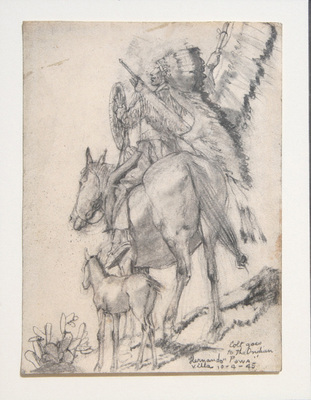 Hernando Villa was a commercial artist and easel painter, best known for his work for the Santa Fe Railway.

Villa was born in Los Angeles to a father who had a painting studio on the plaza.  He studied at the Los Angeles School of Art and Design in 1905 and, after a year in Germany and England, he taught at the School for two years.

Villa established himself as a commercial artist in his home town, illustrating western magazines and creating advertising for the Southern Pacific Railroad and the Santa Fe Railway.  He enjoyed a forty-year relationship with the Santa Fe for which he created his best-known images including the Santa Fe Chief emblem.

Villa also executed easel paintings throughout his career which he showed primarily in California.  He worked in oil, watercolor, pastel, and charcoal.  His most frequent subjects were Native Americans, Mexican vaqueros, California missions, and coastal views.  Villa created a mural for the New Rialto Theater in Phoenix, and won a gold medal for a mural exhibited at the Panama-Pacific International Exhibition in 1915.