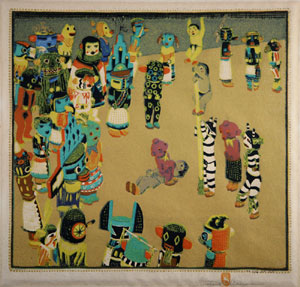 Born June 27, 1881 in Magdeburg, Germany, Gustave Baumann came with his family to the United States when he was ten. Soon after arriving in their new home of Chicago, Baumann's father left the family and Gustave was responsible for supporting the household. At age sixteen he began full-time work as an apprentice for an engraving house, while going to the Art Institute of Chicago at night to "get a little closer to art." He worked next at an advertising studio and by 1903 opened his own studio. After saving one thousand dollars from his new business, Gustave gave half to his mother and left for Munich, Germany to attend the Kunstgewerbe Schule (School of Arts and Crafts). He was interested in learning the bold new style of artwork being produced there. That one-year experience turned out to be one of the most significant influences in his career.

Upon returning to Chicago in 1906, Baumann continued his career as a commercial artist while creating an abundance of intricate wood block prints which developed from opaque watercolor studies of regional landscape scenes. He would then personally cut one block for each color in the scene and edit them until he was satisfied with the results. He then printed editions of the images and sold them. In 1909, Baumann produced his first limited edition (usually 125) color woodcuts and exhibited them at the Art Institute of Chicago. This successful showing enabled him to move to a small town in Brown County, Indiana. The work here became more picturesque. 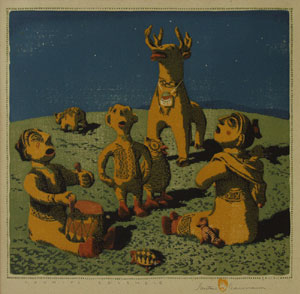 It was also during his time in Indiana that he developed his personal seal, the image of a hand opened over the heart, which was his pledge to make his craftwork available to those who might enjoy it. By that time he was exhibiting nationally and in the Paris Salon. By 1915 he had won the Panama-Pacific International Exposition's printmaking award in San Francisco.

Baumann remained in Indiana until 1917 when he set out for the East coast and lived for a time in Connecticut, Massachusetts and New York. He then headed for Taos, New Mexico to visit artist friends, Walter Ufer and Victor Higgins. He intended to only visit Santa Fe, but ended up living there for over 50 years until his death in 1971.

While living in Santa Fe, he was very involved in the local community. He carved over sixty elaborate puppets and created the "Marionette Theater" which still exists today. During the 1930s he was the WPA co-ordinator for Santa Fe. He wrote and illustrated "Frijoles Canyon Pictographs", which contained his woodcut images of the sacred Indian pictographs of northern New Mexico. This was selected as one of the 50 best books of the year 1940. He made several trips to California and created eleven wood block prints of California scenes. Baumann's work seemed to share some kind of contentment with his own life with his viewers. His work is in the New Mexico Museum of Fine Art, the Los Angeles County Museum of Art and many private collections.