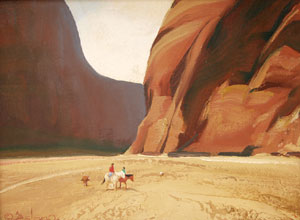 A descendant of Pilgrim stock, Gerard Delano was born only 20 miles from Plymouth Rock in Marion, Massachusetts in 1890. He started drawing Indians on horses at the age of four, which he continued to do his entire life. Delano's first art training started at the Swaine Free School of Design after selling his first illustration to Life Magazine. In 1910 he became a pupil of George Bridgeman at the Art Students League in New York City. He then studied with illustrators Dean Cornwell, Harvey Dunn and N.C. Wyeth at the Grand Central School of Art. He continued working in New York City as a successful commercial artist and illustrator until 1919.

Delano's first trip to the West was to the mountains of Summit County, Colorado in 1919 to work as a ranch hand. In 1920, at the age of thirty, he homesteaded a piece of land at Cataract Creek and built a dirt-roof studio. Commuting to New York for commercial assignments, he was receiving commissions from leading magazines such as Ace High and others which he eventually did the covers for. Then the Depression hit and publishing houses and magazines began to close. Delano could not pay his bills and moved back to Colorado permanently. 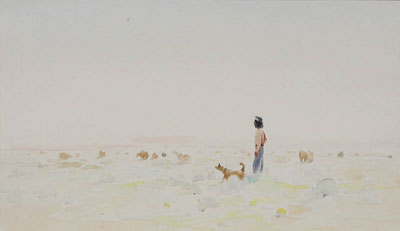 For the next few years he wrote and sold a series of illustrated articles to Western Story Magazine. The subject of the series was a chronological account of all the events in the development of the West starting with before the white man came up to modern times. His research required him to spend many days in public libraries in Denver, and he eventually purchased a studio there. The entire series consisted of a weekly article and a total of 106 drawings that continued to be published until 1940.

At the end of the series, Delano decided to end his career as an illustrator and begin his career as a painter. As his success grew as a Western painter he was able in 1943 to finance his first trip to Arizona and the colorful Navajo Reservation. For nearly thirty years he studied and painted the rich cultural heritage of the Navajo people and gained a reputation for his use of color, design and strong composition. When asked why he painted the Navajo, he was known to have commented, "The Navajo people are a proud and beautiful race of great dignity. It is my idea to show them as I know them. There are few poorer people anywhere, yet it would be difficult to find a happier lot, and I wonder if there is not a lesson in this for all of us."