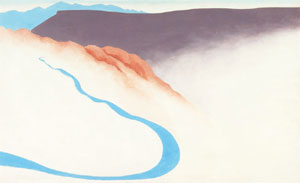 ...I often painted fragments of things because it seemed to make my statement as well as or better than the whole could...I had to create an equivalent for what I felt about what I was looking at...not copy it."  Georgia O'Keeffe

Georgia Totto O'Keeffe was born November 15, 1887 on a large dairy farm in Sun Prairie, Wisconsin.  Her father was a Hungarian immigrant and her mother a descendent from Edward Fuller, a passenger on the Mayflower and a signer of the Mayflower Compact.  Georgia was one of seven children and showed remarkable artistic talent at a very young age.  Her parents encouraged her by providing five years of art instruction by the time she was sixteen.

When she received her high school diploma in 1905, Georgia moved to Chicago to attend the Art Institute of Chicago.  After a year she contacted typhoid fever and later decided to head to the Art Students League in New York in 1907 rather than return to Chicago.  At the League O'Keeffe won the William Merritt Chase still-life prize, which was a scholarship to attend outdoor summer school at Lake George, New York.  While she was there in 1908, she attended an exhibition at gallery 291, which was owned by photographer Alfred Stieglitz who one day would become her husband.

In her studies with William Merritt Chase and Frank Dumond she found the strict adherence to realism stifling and so decided to quit painting for a time.  Four years later O'Keeffe took a summer course for art teachers at the University of Virginia, Charlottesville.  Her instructor Alon Bement from Teachers College, Columbia University, introduced O'Keefe to the new ideas of Arthur Wesley Dow.  Dow taught art as personal expression and a harmony of color, line and value.  She continued to work with these ideas as she taught art in Texas public schools or worked summers as Bement's assistant in Virginia.  While teaching at West Texas State Normal College in 1916 she often took painting trips to the Palo Duro Canyon to enjoy the rich colors of the sandstone formations.

Georgia's friend Anita Pollitzer took some of her drawings to show Alfred Stieglitz, and he remarked they were, "the purest, finest, sincerest things that had entered 291 in a long while."  He showed them in an exhibit without O'Keeffe's permission.  She confronted him, but eventually let the drawings hang.  Her first solo show was at 291 in April 1917.  Stieglitz offered to support Georgia to come for a year to paint in New York and she accepted.  It wasn't long before Alfred had left his unhappy marriage and moved in with Georgia.  He would take over 300 photographs of her over the span of 1918 to 1937.  He continued to manage the sales and promotion of her art even after he closed 291.  His wife filed for divorce in 1924 and he married Georgia by the end of that year.  For the next several years the couple would spend winter and spring in Manhattan and summer and fall in Lake George at the Stieglitz family home.

The 1920s were a time of prolific work for Georgia.  Many of her highly sought-after floral paintings were created then.  She also completed a large body of New York buildings and other architectural forms.  The first of the giant flower paintings called Petunia #2 was done in 1924 and the first exhibition of them in 1925.  She received $25,000 in 1928 for a series of six of her calla lily paintings, which was the largest sum ever paid for a group of paintings by a living American artist.   She rarely signed a painting, but sometimes printed "OK" on the back of the canvas.

In 1929 she took a trip to New Mexico with a friend and fell in love with the landscape and color of the desert.  She often called it "the faraway".  This was the beginning of many summer trips to Santa Fe and Taos between 1929 and 1949, where she often spent time at the homes of Mabel Dodge Luhan and D.H. Lawrence.  Being very much a loner, she bought a Model A Ford and had someone teach her how to drive so she could drive to a favorite site, sit in the back seat (turned around) and paint with her canvas propped against the back wall of the car.

Georgia suffered a nervous breakdown in 1932 following an uncompleted mural project for the Radio City Music Hall.  She was hospitalized in early 1933 and did not paint again for nearly a year.  After her recovery in Bermuda, O'Keeffe discovered the multi-colored cliffs of Ghost Ranch in the summer of 1934 and eventually bought a house there in 1940.  Also in the 1940s, she had two one-person museum retrospectives.  One was at the Art Institute of Chicago in 1943 and the other at the Museum of Modern Art in New York in 1946.  It was the first time a woman artist had been given a retrospective show at MOMA.  The Whitney Museum of American Art sponsored a project to establish the first catalogue of her work in the mid-1940s.

In 1945, Georgia bought an abandoned hacienda in Abiquiu and renovated it for the next three years.  In the summer of 1946 she was called home to New York when Stieglitz suffered a cerebral thrombosis.  When he died in July of that year, she moved to New Mexico permanently.  Throughout the 50s she used the architecture and scenery around Abiquiu to inspire an extensive series of paintings.  She also began traveling internationally and painted a series of clouds inspired by the view from an airplane window.

O'Keeffe was elected to the fifty-member American Academy of Arts and Letters in 1962 and given a retrospective in 1970 at the Whitney Museum of American Art.  This was the first major exhibit she had done since Stieglitz died in 1946.  In 1971 she became aware that her eyesight was failing.  In 1972 she stopped painting, but began doing some pottery.  A young potter named Juan Hamilton had come to her house looking for work and she had employed him for various odd jobs.  He became a close friend and constant companion.  Now 84, she was suffering from an eye disease that caused her to lose her central vision leaving her with only peripheral vision.  With Hamilton's help she wrote a book about her art and allowed a documentary to be filmed about her life at Ghost Ranch.  In her late 90's she moved to Hamiton's house in Santa Fe where he could take care of her, and she died at age 98 on March 6, 1986.  Juan scattered her ashes from the top of the Pedernal Mountain that she painted so many times.  She always said, "It's my private mountain. It belongs to me. God told me if I painted it enough, I could have it."