Gene Kloss (1903-1996) was born Alice Geneva Glaiser but changed her name to Gene after marrying her poet-composer husband Phillips Kloss because she believed the less feminine name would make her more accepted in the art world. The couple took a honeymoon camping trip to Taos, New Mexico, in 1925. Her response to the two-week trip was, “I considered myself a New Mexican from then on.” For the next 20 years they traveled regularly between Berkeley, California, and Taos before finally settling there in 1945. Five years later she was admitted as an Associate Member of the National Academy of Design and in 1972 she became the first woman printmaker to be elected to full membership in the Academy. 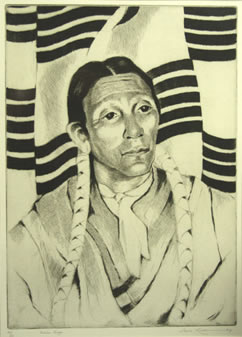 She made her first etching in an etching seminar during her last semester at the University of California at Berkeley in 1924 before graduating with honors in art.

When she died at age 93, she had been making prints for nearly 70 years and left over 600 editions of work for posterity – all of which she printed herself. 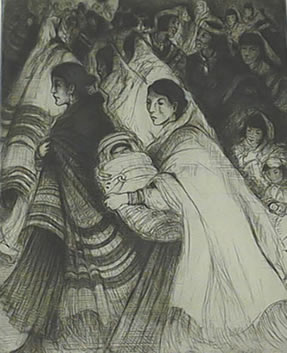 Kloss constantly experimented with etching techniques and even brushed acid onto the copper plates to produce subtle tones, deep blacks, and glowing whites. Ordinarily the image is drawn in an acid-resistant ground and the acid etches the plate where the drawn line occurs. Aquatint produces soft tonal areas where the acid etches between the grains of rosin that had been applied to the plate.

Kloss is considered one of the most important interpreters of the culture of the region despite being lesser known than her painting contemporaries in the Taos Society of Artists. Her work is in the collections of the Metropolitan Museum of Art, NYC; New York Public Library; Smithsonian Institution, Washington, D.C.; Carnegie Institute, Pittsburgh, PA; Fine Art Museum of New Mexico, Santa Fe; Pennsylvania Academy of the Fine Arts; Dallas Museum of Fine Arts; and the Sangre de Cristo Arts Center in Pueblo, Colorado, which has the largest public collection of her works. 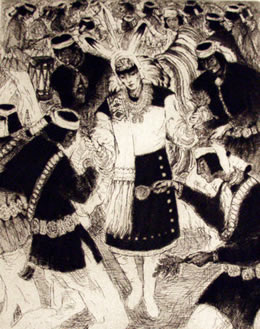