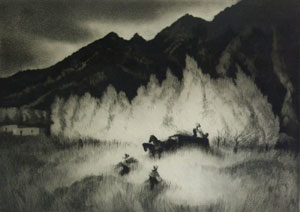 Gene Kloss (Alice Geneva Glasier) was born in 1903 in Oakland, California. She received a Bachelors Degree of Arts from the Univeristy of California, Berkeley in 1924 and studied at the California School of Fine Arts from 1924-1925. She began visiting Taos, New Mexico in 1925 with her husband, poet and composer Phillip Kloss, bringing little other than her sixty pound portable printing place, which they set in concrete near their campsite. They would spend the majority of the year in Taos, wintering in Berkeley, until they moved there permanently as year-round residents in 1945. 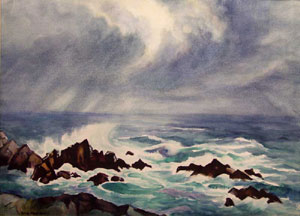 It was as an artistic translator of New Mexico that Kloss is best known. Though an oil and watercolor painter of some renown, it is her prints, with their high contrast and rising diagonal lines that define her career stylistically. Kloss was a meticulous tinkering, constantly trying new methods in an attempt to get exactly the effect she was trying to achieve. She developed an etching form that she called "painting", in which she painted acid directly onto the etching plate, allowing for a wide variety of tones and smooth color gradients. With this technique, she made extremely unique prints, characterized by the sharp forms of the mountains and the haloed white regions of light. 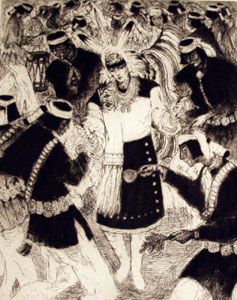 Kloss' work made her quite famous in her own lifetime, with numerous one-artist shows at major museums and pieces placed in the permanent collection of such institutions as the Metropolitan Museum, Library of Congress, Carnegie Institute and San Francisco Art Museum. She was elected a member of the National Academy of Design, was exhibited in Paris alongside Blumenschein, Sloan and O'Keefe, was included in "Fine Prints of the Year" and "100 Best Prints of the Year" on more than one occasion, and had her pieces distributed in schools in New Mexico for the WPA.