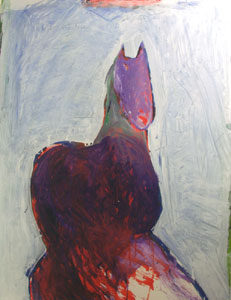 A prolific painter, sculptor, lithographer, teacher, mentor and bookmaker; Fritz Scholder changed Native American art forever and didn't even consider himself part of Native America. Born in 1937 in Breckenridge, Minnesota, Scholder's grandmother was Luiseno, a California Mission tribe. But he was raised in North and South Dakota and Wisconsin. He knew from a very early age when he sold his first painting to a grade-school friend for four dollars that he wanted to be an artist. 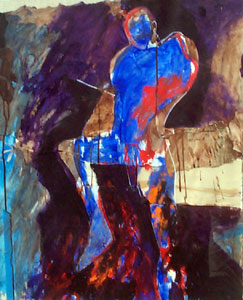 Fritz finished his first year at Wisconsin State University when his father moved the family to Sacramento, California. This was an important event for Scholder's future because he enrolled at Sacramento State University in 1957 where he studied with Wayne Thiebaud who introduced him to abstract expressionism and also gave him an opportunity to show his work to the public. The work he showed with Thiebaud, Gregory Kondos and Peter Vandenberg received excellent reviews. His next one-person exhibit was at the Crocker Art Museum in Sacramento. 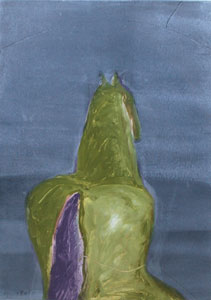 In 1960 Scholder was granted a Rockefeller Foundation full scholarship for the Southwestern Indian Art Project at the University of Arizona. After receiving his Master of Fine Arts degree he moved to Santa Fe to teach painting and history at the newly formed Institute of American Indian Arts. This was another eye-opening experience for Fritz to see the anger and alienation the Native Americans were feeling. Even though he was one quarter Luiseno, he never lived on a reservation or around other Native Americans. So he had a unique perspective on the Native American experience. He tried to break long-standing clichés by doing a pop art series on unconventional subject matter in which he sought to deconstruct romantic images of Native America. Because the work was so controversial, he is sometimes considered a Postmodernist for his use of "mass-culture social commentary." 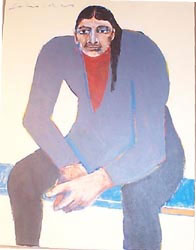 After five years at IAIA he resigned and traveled to Europe and North Africa determined to make his living by doing his art. He then purchased a small home with a studio on Canyon Road in Santa Fe. In 1970 he was invited by the Tamarind Institute to do a large body of lithographs called Indians Forever. In the same year, he had his first one-man show at the Lee Nordness Galleries. He lectured at many universities and art conferences including Princeton and Dartmouth College and in 1972 was invited by the Smithsonian Institution to do a two-person show with T.C. Cannon.

In 1975 Fritz produced his first etchings through El Dorado Press in Berkeley, California. His etchings, lithographs and photographs became very successful, and he was featured at the Heard Museum, Oklahoma Art Institute and a documentary on PBS. From the 1970s on, his awards are many in addition to five honorary degrees from Ripon College, University of Arizona, Concordia College, The College of Santa Fe and the first honorary degree from the University of Wisconsin, Superior. A humanitarian Award from the 14th Norsk Hostfest followed. His love of teaching caused him to become a major influence on an entire generation of Native American artists and created the foundation of what is now known as contemporary American Indian art. Scholder died on February 10, 2005 at his home in Scottsdale, Arizona. 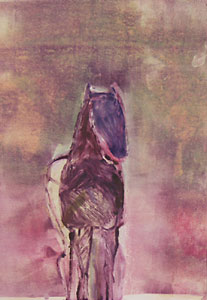