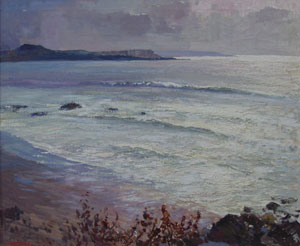 Fremont Ellis was a multi-talented and anachronistic member of the New Mexico arts community for over sixty years. The son of nomadic dentist, carnival performer and theater operator, Ellis received very little formal education of any kind as he bounced around Montana from one mining town to another. During a brief trip to New York City as a child, Ellis went to the Metropolitan Museum of Art, whose collection mesmerized him. He started painting copies of the pieces while still in New York, and continued to paint regularly upon returning to Montana. 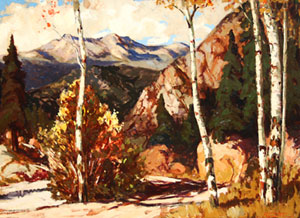 Though he was passionate in his desire to paint, Ellis studied optometry and opened an optometry shop in El Paso, Texas, which promptly failed. He left the field of optometry and traveled to Santa Fe, where he married and settled almost immediately. Again, he was unsuccessful and, beset by financial hardship, he left Santa Fe and moved to California, where he worked as a photographer. It was in photography that he became employed once back in Santa Fe, and his knowledge of camera and film would serve him well in his art. 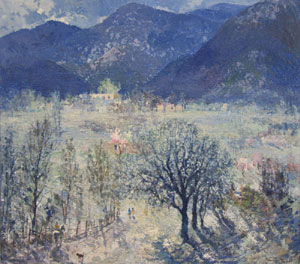 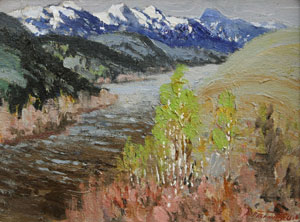 In 1921 he came in contact with four other young painters in Santa Fe: Josef Bakos, Walter Mruk, Will Shuster, and Willard Nash. Together, they founded a modernist art society in Santa Fe called Los Cinco Pintores. Though the charter of the organization clearly described their stylistic orientation as thoroughly modern, Ellis was never truly a modern painter, tending towards a more realistic style with his own curiously tinted palette. To achieve the right look, Ellis took photographs of the scenes he wished to paint with a variety of different lenses and techniques, and then recreated the shifted color palette of the photographs on paper. 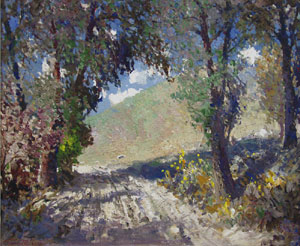 While Los Cinco Pintores didn't last, (they disbanded in 1926) Ellis did, working in Santa Fe until his death in 1985. He showed actively in Santa Fe and Los Angeles, where he had a dedicated following, and his paintings demonstrate a gentle, circumspect individual in the process of recording a region and a way of life that would soon be altered permanently. His work is in the collection of UCLA, the Museum of New Mexico, the Thomas Gilcrease Institute of American History, the El Paso Museum and the Art Institute, Lubbock, TX. 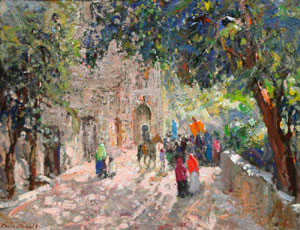