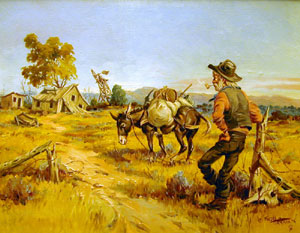 Harman was born in St. Joseph, Missouri, but moved with his family to Pagosa Springs in southwestern Colorado as an infant.  Young Harman was an unhappy student who preferred to draw and ride horses.  He dropped out of school after the seventh grade and worked as a cowboy in the Four Corners region where he met and befriended members of the Navajo, Ute and Apache tribes.

Harman's widowed father moved the family to Kansas City in 1920 and, for a short time, Fred drew cartoons for the Kansas City Star.  Around 1922 he was drawing advertising slides for the Kansas City Filmad Company, working alongside another aspiring cartoonist named Walt Disney.  Harman and Disney formed their own animation company, Kaycee Studios, but it folded after about a year.  Disney then opened another studio and hired Harman's younger brother Hugh.  Fred drifted back to St. Joseph where his family had maintained close ties.  In 1924 he was working there for an engraving company, illustrating western wear catalogues.  He also did illustrations for a book on the Pony Express and designed sets for the silent film, The Pony Express, released in 1925.  He interspersed these jobs with stints as a cowboy back in Colorado. 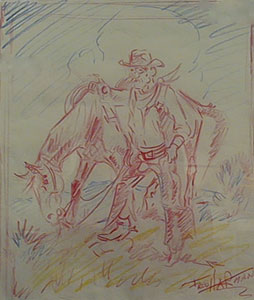 Harman married Lola Andrews in 1927 and the couple soon moved to St. Paul, Minnesota where Harman was a partner in an advertising agency for a few years.  He then worked in Iowa for a short time before moving his wife and son back to Pagosa Springs where they had a log cabin.  In 1933, Harman moved to Los Angeles where brother Hugh, after leaving Disney, co-created the Looney Tunes and Merrie Melodies cartoon shorts.  Fred started a western story magazine but it lasted only three issues.  The Stendahl Art Gallery mounted a show of his paintings, but none sold.  Again, he periodically returned to the cowboy life.

In 1933 Harman had begun drawing a comic strip named Bronc Peeler about a red-headed hero who used his fists and six-shooters to round up rustlers, bandits, and other such archetypal western villains.  Harman self-syndicated the daily strip and it was successful enough that he was able to sell a Sunday version by 1934.  Unfortunately, interest in the strip waned after a few years, and in 1938 he decided to give it up in favor of a job in New York drawing the already successful comic, King of the Royal Mounted.  Although that job did not work out for Harman, he hooked up with the strip's creator, Stephen Schlesinger, who helped him transform Bronc Peeler into a new strip they named Red Ryder.

Schlesinger was a skilled promoter and licensing agent.  He soon sold Red Ryder to a major syndicate who launched it as a Sunday comic in November 1938, and as a daily the following March.  It was an instant success.  Less than two years after the strip's debut, Republic Pictures released a 12-part movie serial based on Red Ryder.  Dell reprinted the strip in comic book form starting in 1939, and the Big Little Books pulp series produced ten Red Ryder stories in the 1940s.  The Red Ryder radio show started in 1942 and ran for about ten years.  Between 1944 and 1947, Republic released 23 feature length Red Ryder movies.  Starting in 1947, Harman drew new material for his comic book series which ran for the next seventeen years.  The Red Ryder television show produced 39 episodes for the 1956-57 season.  Harman's most enduring licensing deal was with Daisy Air Rifles who bought the right to use the Red Ryder name and image less than a year after the comic strip began.

In 1962, Harman turned responsibility for the comic strip and comic books over to his assistant, Bob McLeod.  However, after 24 years, Red Ryder had probably run its course and publication ceased in 1964.  Red Ryder lives on, however, in the license with Daisy which still produces a model by that name.  The 1983 movie, A Christmas Story, about a boy's obsession with the Red Ryder BB gun has become a cult classic.

In 1940, the Harmans had left New York and used money from the early success of Red Ryder to purchase property near Pagosa Springs which they named Red Ryder Ranch.  Harman painted his realistic western action scenes throughout the Red Ryder years, but turned to easel painting full-time upon his retirement in 1962.  He continued to show with Stendahl Gallery in Los Angeles and enjoyed many successful exhibitions there.  In 1965, Harman joined with fellow western painters, John Hampton, George Phippen, Charlie Dye and Joe Beeler, to form the Cowboy Artists of America, and organization that is still growing and thriving.  A book about Harman's art, The Great West in Paintings, was published in 1969.  His home and studio in Pagosa Springs are now a museum of Harman's life and art.