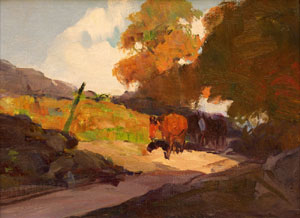 Frank Tenney Johnson was born in Coucil Bluffs, Iowa, not far from the Overland Trail. During his childhood, he saw the steady stream of people heading west in all forms of horse-drawn conveyance. This early exposure to the American West was critical in leading Johnson towards the Western landscape as an inspiration for his work. The resulting body of work is a moody and romantic depiction of a long-gone America, rendered in a style that has become practically a genre all its own.

At the age of fourteen, Johnson moved from Iowa to Milwaukee, WI. There, he took an apprenticeship with F.W. Heinie, a prominent panoramic painter. After a year with Heinie, Johnson apprenticed for Richard Lorenz, a painter and former Texas Ranger who specialized in depictions of horses and western scenes. It was probably during his time with Lorenz that Johnson decided to focus on western subjects himself. He also started illustrating for regional papers and publications, in order to save money for further training.

Further training, as with many of the artists who populated New Mexico in the early twentieth century, took place at the Art Students League in New York, where Robert Henri, William Merritt Chase, John Twachtman, Kenneth Hayes Miller and F. Louis Mora were in the process of teaching perhaps the last great batch of pre-modernists. Though highly stimulated by the training, Johnson was only able to stay for five months, after which he returned to Milwaukee to work and save money in an effort to return to New York. He was able to do so after a time and, upon returning, established an important professional relationship with Emerson Hough, the editor of "Field & Stream" magazine. 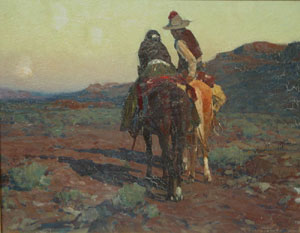 At Hough's urging (and on Hough's dime), Johnson traveled to Hayden, Colorado, where he tagged along with a group of cowpunchers in order to sketch their way of life. Though primarily an artist, Johnson also wrote accounts of his time in Colorado for "Field & Stream." After Colorado came Cheyenne, Wyoming, where Johnson attended a "Frontier Days" celebration; after Wyoming, Johnson traveled to New Mexico, where he observed the Navajos and their threatened way of life. This trip changed Johnson from an academic artist with an appreciation for the west to a truly western artist.

Of particular interest to him, in stark contrast to other western artists of the time like Frederic Remington and C.M. Russell, were the more quotidian scenes of the West. Specifically, Johnson focused upon scenes featuring horses, especially at night. Johnson painted a great number of pieces that featured horses tied up outside of saloons, inns or trading posts for the night, the moonlit night punctuated by the warm glow from the lamps inside. In this, he can be considered a pioneer, as his night pieces still serve as the archetype for such work in western art.

Johnson became quite successful through his work for "Field & Stream." He was chosen to illustrate books by the prominent writer Zane Grey, and his gallery shows sold briskly. In fact, one particular show, at the Grand Central Art Galleries at the Biltmore Hotel in New York, sold out opening night. In fact, one man had bought out the entire show: Amon Carter. Having achieved financial security and comfort, Johnson followed his good friend Clyde Forsythe to Alhambra, CA, where the two established residency and shared a studio. 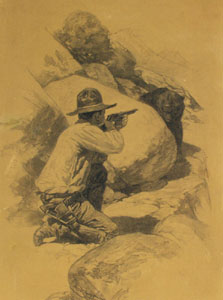 California treated Johnson well. He and Forsythe founded the gallery at the Los Angeles Biltmore, and their studio became a gathering place for famous contemporaries like Charlie Russell, Ed Borein and Norman Rockwell. Johnson opened his own Los Angeles studio, to augment his studios in Cody, Wyoming and New York City. He sold pieces to the National Gallery in Washington and, in 1937, became an Academician of the National Academy of Design. He and Borein also started a trail riding group in Santa Barbara called Rancho Visitadores, which still meets to this day.

At the very zenith of his career, a terrible event befell Frank Tenney Johnson. After kissing his hostess at a party in December of 1938, Johnson either contracted or passed spinal meningitis; him and the hostess he kissed both succumbed to the disease. For an individual who had always preferred warm, peaceful scenes and who had created such time-consuming, painstaking pieces (because of his chosen technique of creating chalk-white bases on his pieces mixed with a small amount of vermilion and then left to dry, a single canvas could take more than a year to complete) it was an abrupt and inglorious end to a fantastic career.