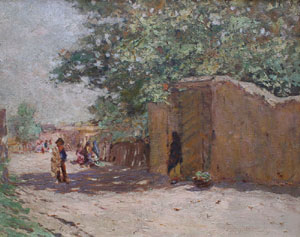 Frank Sauerwein was a respected painter of western landscapes, Indian portraits, Indian genre scenes, and California missions.  His promising career was cut short by his death of tuberculosis at age thirty-nine.

The son of European-trained artist, Charles D. Sauerwein, Frank took his first art lessons from his father before studying at the Philadelphia School of Industrial Art, the Pennsylvania Academy of Fine Art, the Art Institute of Chicago and, finally, the Philadephia Museum School of Art.  In 1891 he moved to Denver in hope of improving his health. 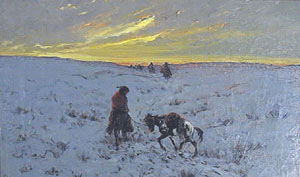 In 1893, Sauerwein accompanied the artist Charles Craig on a trip to the Ute reservation in southwestern Colorado.  This began Sauerwein's unyielding fascination with the Southwest and its Native inhabitants.  After a trip to Europe, he returned to the American West, visiting Taos in 1899 and Santa Fe in 1900.  That same year, Sauerwein visited the Navajo reservation, becoming good friends with trading post entrepreneur, Lorenzo Hubbell.  He also spent time at Keam's Canyon on the Hopi reservation where he sketched local inhabitants.

Sauerwein moved to Los Angeles in 1901, and then to Pasadena in 1902, but he maintained his contacts in the Southwest with Summer trips to the Grand Canyon, New Mexico Indian Pueblos, Taos, Santa Fe and Albuquerque.  He especially loved the Grand Canyon which is the subject of a large number of his paintings.

Rendered in a tight, academic style, Sauerwein's paintings clearly show the influence of German romanticism.  They are set apart, however, by their hard, clear light which is true to conditions in the American Southwest and very different from the heavy, atmospheric representations of the east coast and Europe.  Also unlike the earlier romantics, most of Sauerwein paintings are in very small formats.

Sauerwein returned to Europe in 1905 and exhibited paintings from this trip in Los Angeles the next year.  He also exhibited European and Southwestern paintings in San Francisco and Kansas City.

In 1906, Sauerwein purchased an eight-room adobe house in Taos, adjacent to the home of Dr. T.P. Martin.  Mrs. Martin assisted in his care for the next two years, but as his health continued to decline he was forced to give up painting.  He left for Connecticut in 1908, seeking a cure.  Upon his death there in 1910, he left his Taos property to Mrs. Martin and part of it is now incorporated into the Toas Inn which she opened after the death of Dr. Martin.