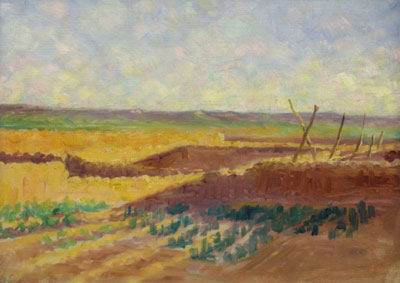 Frank Whiteside was born in 1866 in Philadelphia. From 1888-1892 studied at the Pennsylvania Academy of Fine Arts with Thomas Anschutz, and then went to Paris to study at the Academie Julian with Benjamin Constant and Jean-Paul Laurens.

Between 1890 and 1920 he toured and painted many places in California and the Southwest. He spent an extended period of time living with and painting the Zuni Indians in New Mexico, and painting the Apache and Hopis in Arizona. His first-hand interpretation of the culture and lifestyle of the Native Americans enabled him to establish a successful reputation with Eastern collectors eager for this subject matter.

Unfortunately Whiteside's life was cut short in 1929 when he was shot to death by an unknown assailant while answering the front door. After a memorial tribute at the Philadelphia Sketch Club, Whiteside's work was nearly forgotten until 1971 when the Phoenix Art Museum showed a retrospective of his work called, "Frank Reed Whiteside (1866-1929): The Zuni and The Indian Country." Two of the paintings from that exhibit were given to the White House by the Academy.