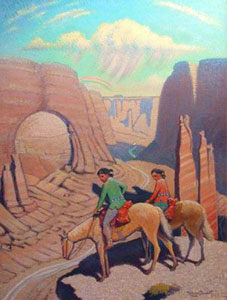 Ferdinand Burgdorff is known for his romantic landscape paintings of the Monterey Peninsula and the desert Southwest.

Born in Cleveland, Ohio, Burgdorff studied at the Cleveland School of Art before heading to Paris to work with Rene Menard and Florence Este.  In 1907 he settled in Carmel, California and became an active member of the art colony.  In 1919 he lived in Mill Valley, California but moved back to the Monterey Peninsula the next year and built a house in Pebble Beach designed by the legendary architect, Bernard Maybeck.  He lived there for the rest of his life.

During the years 1907 to 1924 Burgdorff made numerous trips to the southwestern deserts, including the Hopi and Navajo reservations and the Grand Canyon, which provided him with subject matter for the rest of his life.  He accompanied railroad crews and surveyors into uninhabited desert areas to find and record unspoiled landscapes.  He stayed, for a time, in Santa Fe where he preferred to paint desolate stretches of desert rather than the more popular aspen and adobe themes.

In 1911 Burgdorff exhibited his western paintings in his native Cleveland, raising enough money to fund a trip to the eastern Mediterranean.  He was especially interested to tour and paint among the ancient desert civilizations of Egypt and Greece, and said the Nile reminded him of the Colorado River.

Burgdorff painted mostly landscapes of coastal scenes, lighthouses, mining towns, sandy deserts, and red rock canyons.  He also did a limited number of genre and figure pieces and created etchings of his favored subjects.  His paintings exhibit a strong sense of design, stylized drawing, and saturated color.  Heavy atmospheric effects and a tonalist sensibility often give his landscapes a sentimental quality.  His genre painting, mostly of Native villages in Arizona and New Mexico, are romanticized depictions of the "Noble Indian" in the manner of the Taos and Santa Fe painters of the early twentieth century.