For Gerald Clarke’s latest major commission, where he’s painting is as important to the artist as what he’s painting. The Agua Caliente Resort Casino Spa in Rancho Mirage, CA may not seem to equal the prestige of a museum for showing his work, but to Clarke, an enrolled member of the Cahuilla Band of Indians who currently lives on the Cahuilla Indian Reservation in Southern California, the location’s accessibility to his community makes up for its lack of shushing docents and marble columns.

“To be able to do what you do, where your own community can see it, in a professional setting and experience it – when they invited me, I jumped at that chance because that’s really important to me to be able do something locally,” Clarke said.

The artist has had his work exhibited at Southern California’s most prestigious art spaces – the Autry Museum, the Huntington Library, the Palm Springs Art Museum – still, this casino project holds special meaning.

“It’s a question of accessibility. My show at the Palm Springs Art Museum, we had 100, 150 Native people show up for the opening reception and that’s not typical. In fact, a lot of those Native people had probably never been to the museum even though they live locally because some social spaces have not historically been open to different populations – and Native populations are part of that,” Clarke explained. “For me, the Palm Springs Art Museum show, the thing I’m most proud of was that we got Native people to come to the museum and experience a whole new world.”

As difficult as it proves for any artist to have their work displayed inside esteemed institutions, Clarke (b. 1967; Hemet, CA) has found it equally challenging to have his work represented professionally and with distinction in a setting available to his fellow Cahuilla.

“As an artist, never mind self-expression and all that stuff, (sharing my work locally is) my obligation to my Native community, to try to engage them,” Clarke said. “In the art world, if you want to be successful, you have to show in New York or Berlin or Paris, but how many Cahuilla people are going to see my work over there?”

Thousands of Cahuilla will be able to see Clarke’s mural which will take up a huge wall at the entrance of the casino/hotel – roughly 12-feet tall by 8-feet wide. The image represents Cahuilla heritage, capturing indigenous plants, basketry, references to spiritual beliefs, ceremonies and native landscapes.

Clarke represents Cahuilla history through an orange, diamond-patterned reproduction of a petroglyph running down the length of the wall.

The mural was created using the artist’s “kitchen sink” approach, “anything I can get my hands on is what I make art with.”

The wall was painted in acrylic. The petroglyph was recreated on computer and then printed and cut out on vinyl. To replicate the Cahuilla Bird Song rattles depicted, he used painted plywood. Bird Singing is a traditional form of singing that tells the cosmology of the Cahuilla people, a practice Clarke personally participates in.

His 18-year-old daughter, Lily, helped on the project throughout, particularly inside the darkened casino which strained dad’s aging eyes.

To the landscape, petroglyph and rattle, Clark has added a Yucca whipplei. This plant is important to the Cahuilla in terms of material culture, providing fiber for cordage, rope and sandals. The flower is eatable and one of the tribe’s traditional foods.

A small hummingbird hovers beside the Yucca.

“I was told the shaman back in the day would derive their power from some aspect of nature. One of the most powerful powers a shaman could have is the toochil – the hummingbird,” Clark explains. “That’s why I’ve included the hummingbird; again, it’s the land, it’s the environment, it’s the history and then the Bird Song rattles are our culture.”

Wall text will help explain the mural’s significance to visitors. 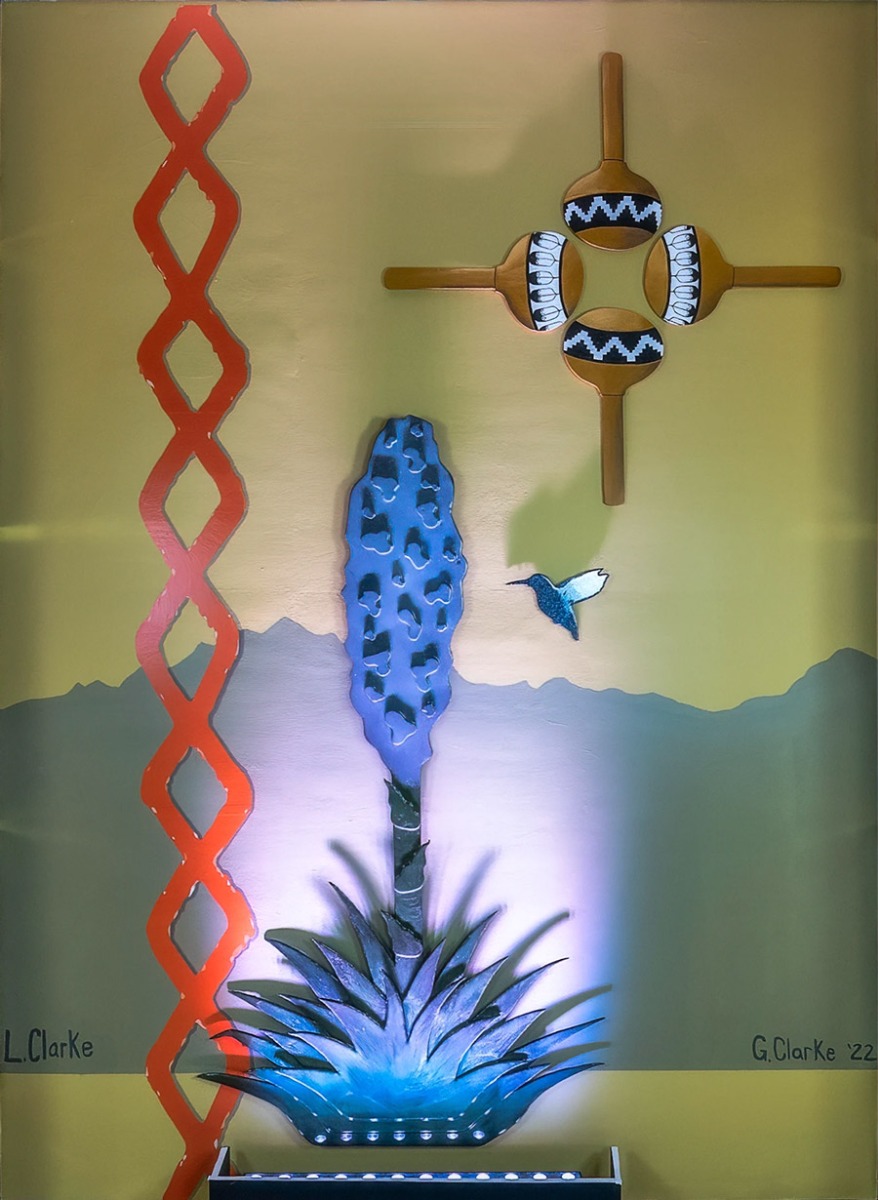 In addition to his 30-year artmaking practice, Clarke serves as an Assistant Professor of Ethnic Studies at the University of California-Riverside teaching classes in California Indigenous history and culture as well as contemporary Native American art.

Clarke sees Indigenous artwork, through its visibility in public spaces, as playing a significant role in educating non-Natives about Indigenous life and culture, beginning with sovereignty.

What does he mean by “creative sovereignty?”

“For so long, Native artists have been told what to make, not necessarily verbally told, but through collections, museums, through galleries – this is what sells, this is what you should make,” Clarke explains. “People often come up to me and say, ‘Do you make Native American art?’ It’s all I can make! But we know what they’re talking about, these stereotypical images. All they do is validate mainstream America’s idea of what a Native is – that’s not necessarily what a Native is, or what Native culture is.”

Clarke’s “creative sovereignty” demands freedom for the artist, but also accountability by the artist.

“I think it’s important that Native artists have this control of their creativity. That also has responsibility and obligation back to the community of representing who they really are,” he said. “I have a whole community that if I’m representing a false image in my work of the Cahuilla people, they’re going to call me out, and rightly so.”

Clarke’s perspectives from the user end of the paintbrush enlighten art lovers to consider Native American artists in a different context.