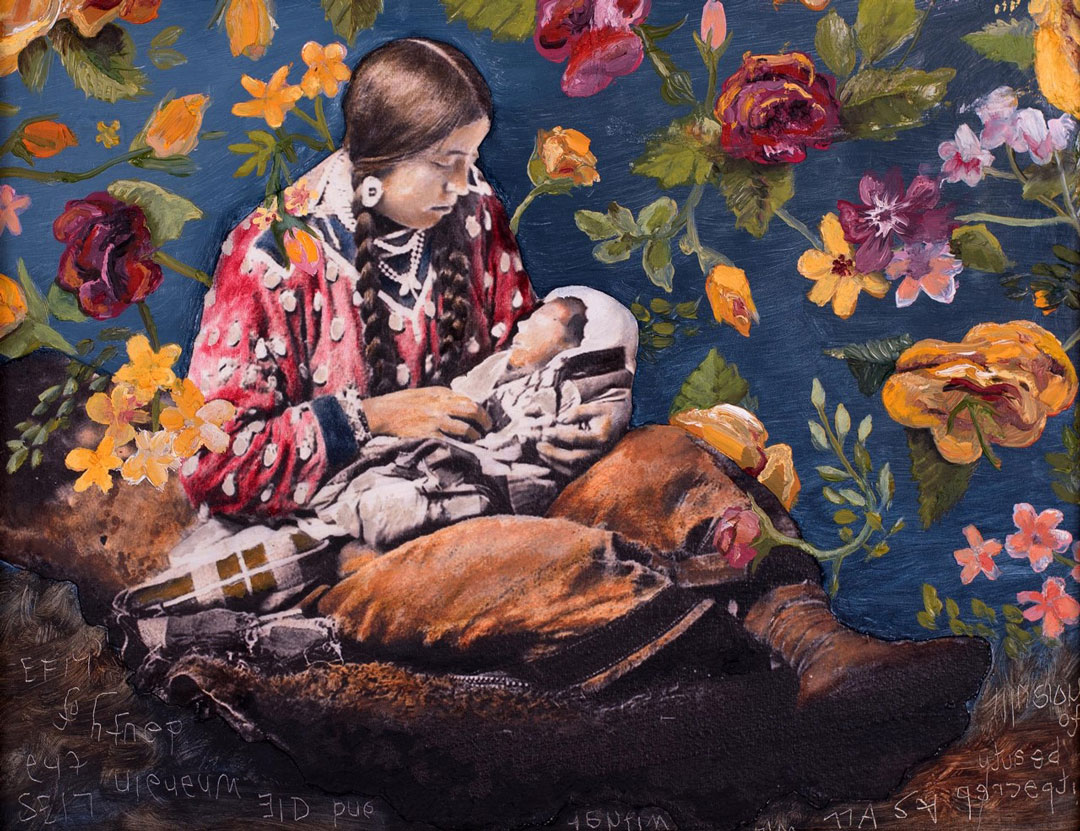 Visitors to the “Apsáalooke Women and Warriors” exhibition at the Museum of the Rockies in Bozeman, MT will find sacred war shields, horse regalia, a 9-foot-tall modern tipi reproduction, and more than 20 works of contemporary art including paintings, photographs, beadwork and fashion. They may also find something even more meaningful: a new way of looking at the world.

“There are people in this country, I think young people particularly, who do not identify with Christianity, it doesn't answer all the questions that they need answered,” exhibition curator Nina Sanders (Apsáalooke) said. “Or maybe there's something that doesn't connect; maybe they enjoy going and meditating in the mountains. What this (exhibition) does is it offers a completely different worldview.”

The worldview of a Native American community known for its horsemanship, artistic pursuits, matriarchal ways of life and honoring the tradition of “counting coup” – performing acts of bravery.

For anyone who wakes up each morning and sees America burning – literally and figuratively – for people struggling to cope in a society on the brink of collapse using only the resources provided by that collapsing society, “Apsáalooke Women and Warriors” suggests an alternative.

From Montana to Chicago and Back Again

Chicago’s famed Field Museum of Natural History seems like an odd place for a groundbreaking exhibition devoted to a western Indigenous nation to originate. That history goes back to the early 1900s when anthropologists of the day – including those from the Field Museum – scoured Indian Country, “salvage collecting” for precious Native American material they expected to soon vanish along with the people and cultures who created them.

Field Museum researchers brought back troves of material from the Apsáalooke (Crow) in south central Montana; primary among the treasures were more than 70 war shields. Colonial institutions and collectors, like the Field Museum, were foremost interested in acquiring sacred objects. Second on the list were war objects. The war shields were a combination of both.

Aesthetically, they also served the romantic idea of the Plains Indian as a stand in for all Native American people. War shields fueled a trope as Sanders points out.

The shields were foundational to the museum’s interest in a potential Apsáalooke exhibition. Good timing and good fortune played a part as well.

Sanders had already been working with the Field Museum on a separate project when a smaller gallery space opened. Officials asked Sanders if she could put together another show – the first at the museum ever curated by a Native American – in what amounts to an institutional blink of an eye: nine months.

How did she, with the help of her community, pull it off?

“Crow people are ethnocentric in a very glorious way,” she said. “We still speak our language, we still are very involved with one another, our clan systems still dictate our social customs.”

Inundated in their culture, practicing, sharing – all of the materials, knowledge and storytelling necessary to stage an exhibition was on hand, ready to go to. Without the Apsáalooke keeping their way of life current, the research and gathering of objects necessary to stage the show would have been impossible to achieve in such a short amount of time.

Having been presented at the Field Museum from March of 2020 into summer of 2021, “Apsáalooke Women and Warriors” debuted in Bozeman on May 28th where it will remain on view until January 2, 2023, with one final scheduled stop at the Carnegie Museum of Natural History in Pittsburgh later next year.

While more people visit the Field Museum each year than live in all of Montana, as homeland to the Apsáalooke, this stop obviously takes on special meaning. 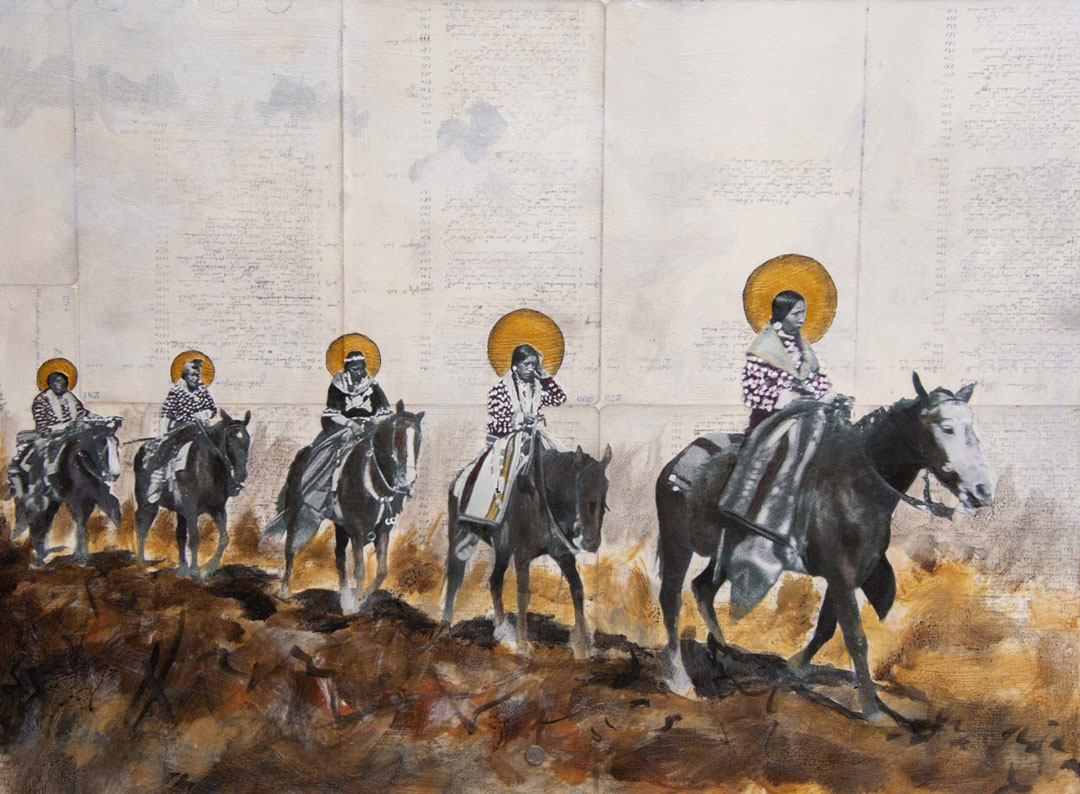 Sanders targeted an audience of young people and those unfamiliar with Native Americans broadly or Apsáalooke specifically when putting the show together.

“It's written in a way for individuals to come in and have a multi layered experience of color, of visual stimulation – photographs, paintings, teepees – and then sounds. We have Crow people speaking Crow, singing Crow songs,” she explains. “It captures a little bit of who we are today: we're educated, we have master's degrees, we fly all over the world, we're building technologies, but also we still participate in tobacco society and have rules about living our life a certain way.”

While the intended audience is mostly “outsiders,” the storytelling comes from an “insider’s” perspective.

“It's written in first person; every part of (the exhibition) is a story,” Sanders said. “You don't have the typical anthropology like, ‘here are a pair of moccasins that a Plains woman would have used to traverse across the prairie.’”

“It isn’t that; it tells a story,” she continued, providing a specific example. “The way that a pair of Crow moccasins are made is for the person who's wearing them to enjoy them, and when you see them – when you look down at your feet – it's for you. The people that are on the other side who are not you, looking at your feet, they're still going to see how beautiful they are, but there's another layer of understanding when they're on your feet.”

Those are the nuances of Apsáalooke culture articulated in the exhibition.

“When you’re a child, your parents are putting your clothes on, tying your moccasins, showing you how to put a dress on and how we part our hair, these are parts (of our culture) that haven't been captured by ethnographers,” Sanders said. “These are perspectives of women and everyday people who use these things, who live with these things every day, and by things, I mean concepts, ideas, beliefs, prayers.”

All of which ties together the historic shields and the contemporary art on view.

“What is consistent, the connection between what was made in the past and what's made today, is the world view and the cosmology; it's the way of seeing and thinking about yourself and the world around you,” Sanders said. “That essentially comes out in the art. There's a whole Crow color theory. If you look at a piece of Crow beadwork, you're going to see multiple shades of blue… that matches nature. The sky rules our universe, the beings that watch out for us, they are with the stars and the sky.”

The images on the war shields, similarly, are derived from birds and the cosmos. The morning star is a common element. The imagery extends to home décor and Apsáalooke clothing.

Cosmology, worldview, color theory, symmetry, shapes including the hourglass and pyramids, forms resembling mountains, visitors to the exhibition will see all of this repeating along with themes of bravery, success, beauty and taking care of the things around you.

The essentials of Apsáalooke cultural production.

“(The exhibition) is supposed to help people connect. It provides another layer of information, of narrative,” Sanders said. “You walk around in Bozeman or anywhere in Montana and you see a Kevin Red Star (Apsáalooke) (painting), maybe you see some Crow bead work, you see some Crows out on the street or you catch a parade or something, but what this (exhibition) does is it provides another layer of understanding and worldview that gives all of those experiences context.”

And in that context, perhaps, answers. 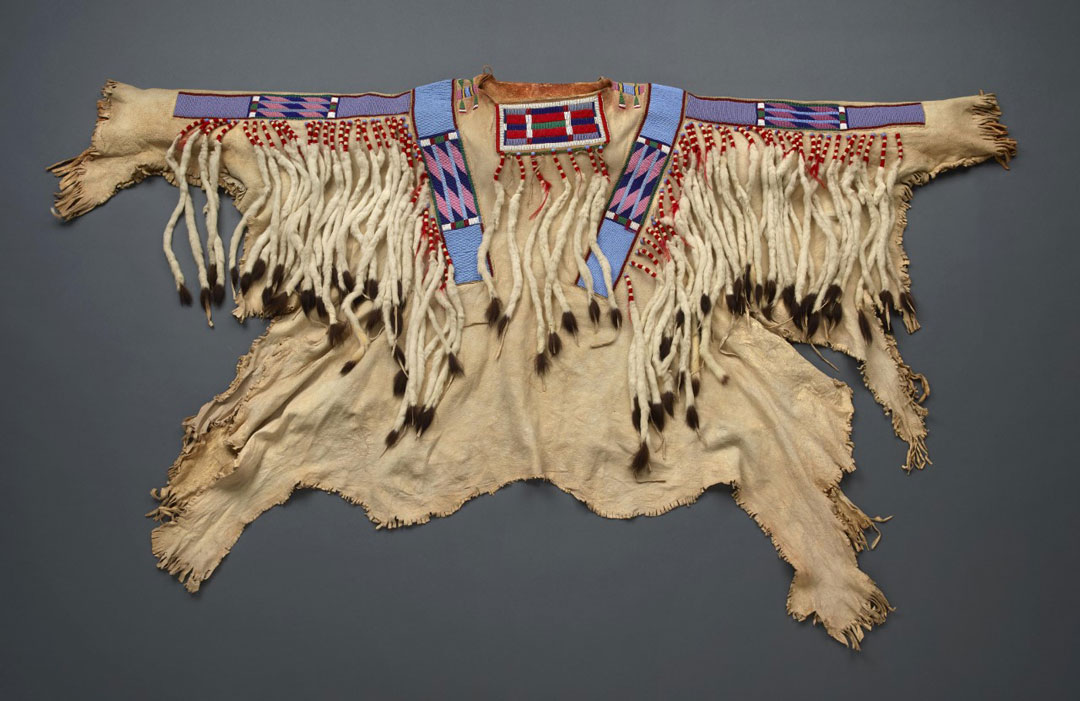