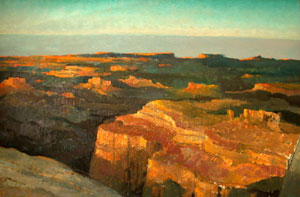 Artist, author and folklorist, Eric Sloane, is best known for his paintings of New England farmscapes and his illustrated books of early Americana.  As a visitor and eventual resident of New Mexico, he also is considered an important artist of the Southwest.

Sloane was born Everard Jean Hinrichs to a prosperous family in New York City.  As a youngster, he learned lettering and sign painting from his neighbor, Frederic Goudy, a noted type designer.  In 1925 Hinrichs left home in a Model T Ford, and made his way across the country earning money as a sign painter.  The next year he landed in Taos where he met members of the art colony, painted signs, as well as a few of his earliest pictures.

Back in New York, Hinrichs continued his sign painting career.  Among his clients were many of the early aviation pioneers at Roosevelt Field, Long Island who asked him to paint names and identifying marks on their aircraft.  Wiley Post not only was a client, but also taught Hinrichs to fly, instilling a life-long love of the aesthetics and science of clouds and sky.  Amelia Earhart is said to have purchased one of his first cloud paintings.

In the mid-1930s Hinrichs studied at the Art Students League under John Sloan.  As part of his transformation from sign painter to fine artist, he adopted the name "Sloane" in homage to his mentor, and the name Eric from the middle letters of "America."

Settling in New Milford, Connecticut, Sloane quickly became a highly skilled and phenomenally prolific painter of the rural landscapes and colonial architecture of New England.  He painted in a detailed, realistic style with a slightly choppy brush technique that enhanced the rustic quality of his subject matter.  Slone reportedly painted 15,000 pictures over his career, averaging almost one per day.

In the early 1940s, Sloane's interest in meteorology resulted in publication of several books on weather and clouds.  In the 1950s he began his meticulous documentation of colonial architecture, tools, and folklore, resulting in a series of books that he both wrote and illustrated.  The most famous of these include: A Reverence for Wood, Our Vanishing Landscape, A Museum of Early American Tools, American Barns and Covered Bridges, and Diary of an Early American Boy: Noah Blake - 1805.  In all, Sloane produced 35 books, many of which are still in print.  His vast collection of tools, which served as models for many illustrations, became the nucleus of the Sloane-Stanley Tool Museum in Kent, Connecticut.

Sloane and his wife returned to Taos for summer visits in the 1950s and 1960s, and spent much of the year 1960 painting the Indian Pueblos, Spanish villages, desert landscape, and brilliant skies of New Mexico.  In 1975 he built a home in La Tierra, just north of Santa Fe, which he named "Las Nuves," The Clouds.  Sloane divided his time between the East and Southwest, continuing to paint the buildings and landscape of each region until his death of a heart attack in 1985.