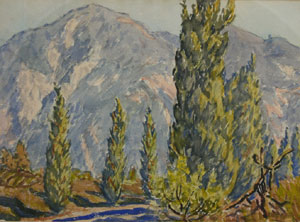 Elliot Torrey was an impressionist painter best known for seascapes and portraits of children.

Born in East Hardwick, Vermont, Torrey graduated from Bowdoin College with an M.A. in 1890.  After further study at the Art Institute of Chicago and in Paris and Florence, he established a studio in Boston.  In the first decade of the twentieth century Torrey returned to Paris for several years, studying and showing his work.  He returned to the U.S. in 1911, opening a studio in New York.  In 1923 he moved to Pasadena, California where he spent four years before settling permanently in San Diego. He directed the WPA art project there in 1933-34.

Torrey was a member of the Salmagundi Club, the Society of Independent Artists, Boston Art Club, and Contemporary Artists of San Diego.