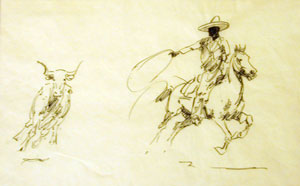 Edward Borein, along with Charlie Russell, is the most authentic of all the early cowboy artists by virtue of his familiarity with the lifestyle, sites and sounds of the west. "I will leave only an accurate picture of the West, nothing else but that. If anything isn't authentic or just right, I won't put it in any of my work." 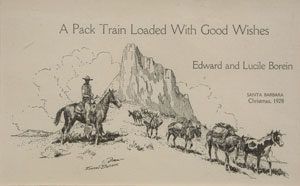 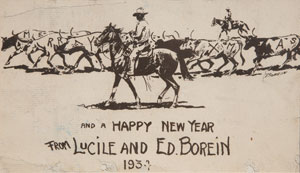 Born in San Leandro, CA, Edward Borein would often see cows passing the family home as a child. At the age of five, Edward Borein sketched his first piece of two horses pulling an ornamented hearse. This kind of doodling would also occupy him once he entered school, as the margins of the page got quite a bit more attention than the answer blanks on any page belonging to Ed. He knew how to ride, rope and drive cattle at twelve and, upon turning eighteen, took what money he had and bought a horse and a bedroll, setting off down the coast in order to work as a cowboy. The first time did not take- Edward Borein ended up back in Oakland after just one year. His mother saw the quality of the sketches he had done while cow-punching and enrolled him in the Art School of the San Francisco Art Association. 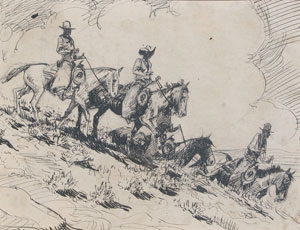 Edward Borein didn't last long in art school, dropping out after only a month. However, while in school he met both Jimmy Swinnerton and Maynard Dixon, who were enthusiastic in advising Edward Borein to continue his art on his own. Borein set out again, this time to the 45,000 acre Rancho Jesus Maria, where he found the work grueling beyond his previous experience. While at the ranch, Edward Borein sent two drawings to Charles Lummis, publisher of the Land of Sunshine, who bought them both for $15. After Rancho Jesus Maria, Edward Borein headed to Mexico, where he learned Spanish and sketched the local lifestyle and landscape while working as a Vaquero on a series of large ranches. Crossing the border back into the United States, Edward Borein came in contact for the first time with Navajo, Hopi, Zuni and Pima Indian Tribes.

In 1900 Edward Borein took an illustrating job at the San Francisco Call and set off an a sketching trip to the Northwest with Maynard Dixon. In 1903 he went to Phoebe Hearst's ranch in New Mexico and visited El Paso, Laguna, Acoma, Taos, Oraibi and Walpi. The sketches Edward Borein made during this period would be drawn upon numerous time later in his life for etchings. His India ink drawings appeared in Harpers, Colliers Weekly, Sunset Magazine, The Saturday Evening Post, and ads for Stetson Hats, Pierce Arrow and Aunt Jemima. 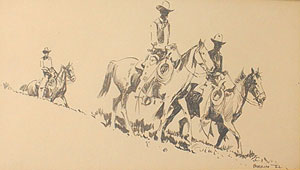 Edward Borein's burgeoning success convinced him to move to New York City, where he would live for twelve years as an artist and illustrator. Edward Borein became friends with Will Rogers and his idol, Charlie Russell, and met many of the major figures in western art and entertainment. Russell was impressed by Borein's work and told him that he could be the best oil painter of any western artist with continued practice. Taking this as a thinly-veiled criticism, Edward Borein ceased painting oils for a time and would concentrate on watercolors for the rest of his career. In 1921, tired of the city, he moved back to California, where he married and settled in Santa Barbara, where Edward Borein became a member of the Santa Barbara Art Club. 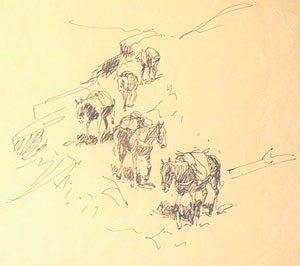