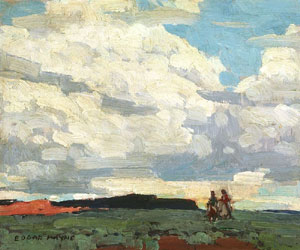 Edgar Payne was born in Washburn, Missouri in 1883. Leaving home at the age of fourteen, Edgar Payne made his way to Chicago working as a house, sign and set painter. Once in Chicago, he became well-known as a set painter and soon was commissioned to paint an 11,000 square foot mural for the Congress Hotel. Edgar Payne enrolled in classes at the Art Institute of Chicago but did not care for the instruction and soon dropped out. Edgar Payne continued to paint, however, joining the Chicago Society of Artists and the Palette and Chisel Club, and began traveling around the country for new subject matter to paint. 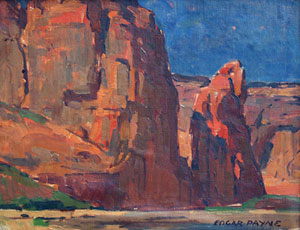 It was on one of these trips in 1909 that Edgar Payne happened upon Laguna Beach. Struck by the landscape, which was unique to a thus-far landlocked artist, Edgar Payne returned to paint the region often over the ensuing years. In 1912 Payne married fellow artist Elsie Palmer, who had met on one of his trips to California, in a ceremony in Chicago. Three years later, Payne and Palmer moved to Santa Barbara and, four years after that, Laguna Beach. There, Edgar Payne founded the Laguna Beach Art Association and served as its first president. The years 1919-1922 were relatively stable for Edgar Payne, as he traveled less than would be typical for him over the course of his career. In 1922 he and Elsie set off for a two year tour of Europe and, after that, returned to the United States and began living bi-coastally, moving between New York City and the Los Angeles area with the seasons. 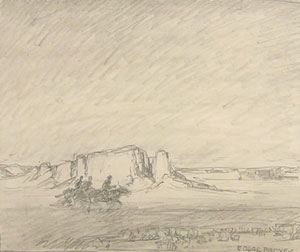 Beginning in 1917 with a commission from the Santa Fe Railroad, Edgar Payne began traveling the Southwest of the nation in an effort to discover new landscapes and subjects to paint. Edgar Payne began to explore the Grand Canyon, Canyon de Chelly and Northern New Mexico, developing a new color palette to match the light and earth of the region. Along with the Sierra Mountains, the subject of Edgar Payne's best-known work, the Southwest would be a region of continued interest for Edgar Paynee. His travels were extensive and well-documented, to the point that a lake in the High Sierras, Payne Lake, is named after him. 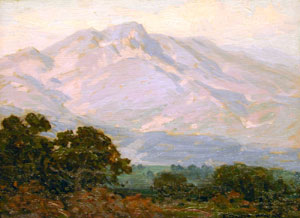 Fame struck early and often for Edgar Payne during the course of his career. He received an Honorable Mention in the 1923 Paris Salon, did a number of major commissions, including large mural pieces for the Empress Theater in Chicago, the Queen Theater in Houston and the Clay County Court House in Brazil, Indiana. Edgar Payne's work can be found in many museums, including but not limited to the Art Institute of Chicago, the Oakland Museum, the Fleischer Museum, the National Academy of Design, the Indianapolis Museum, the Laguna Museum and the National Museum of American Art in Washington, D.C. 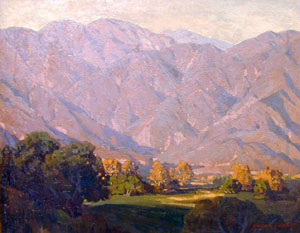