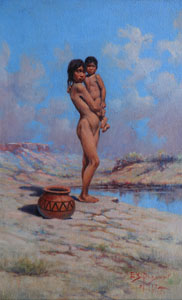 Paxson was born in East Hamburg, New York, near Buffalo.  After his schooling, he worked in his father's carriage business painting carriages and lettering signs.  There is no evidence he had any other art training.

Paxson longed for the kind of western adventure he read about as a youth, and at age 25 he left his wife and child in Buffalo and headed for Montana Territory.  There he worked as a ranch hand, stage driver, hunter, guide, military scout and other frontier jobs that immersed him in the work and experience of western settlement.

In 1879 he sent for his family and moved to Deer Lodge, Montana where he painted signs, theater backdrops, saloon decorations, and other commercial art.  In 1881 the Paxsons settled in Butte where the mining boom provided more business opportunity.  He continued to do commercial painting, but he also established a studio and spent more time at easel painting.  Paxon served for ten years in the Montana National Guard and spent eight months in the Philippines during the Spanish-American War.  In 1905, he moved to Missoula where he lived the remainder of his life.

By the end of the nineteenth century, Paxson made his living primarily from easel painting.  He worked in oil and watercolor in a detailed, representational style similar to that of Charles M. Russell who became a close friend.  In 1899, he completed his most famous painting, a six by ten foot canvas entitled Custer's Last Battle on the Little Big Horn.  He started researching the battle shortly after arriving in Montana, interviewing Indians who had participated in it and soldiers who had first arrived on the scene.  It took Paxson six years to complete the painting which he then toured around the eastern US, charging twenty-five cents to view it.

In 1911, Paxson received a commission to paint six murals of Montana history for the State Senate chambers in Helena.  The next year, the Missoula County commission hired him to paint eight murals for the county courthouse showing scenes from the Lewis and Clark expedition and early pioneer life.  Paxson was considered especially qualified for this work because he had both observed and participated in the settlement of Montana and his paintings were said to capture the true appearance of that time and place.