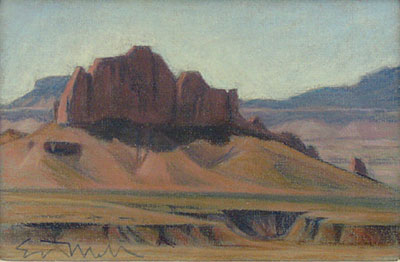 In an Ed Mell painting, cotton ball clouds and rocky mountains often undergo a metamorphosis, becoming simplified forms with knife-sharp edges.  A rose or cactus bloom may take on a colossal scale, with crystalline petals resembling shards of stained glass. Pink buttes may be rendered as deep coral rose, and blue-gray rain may appear as blue sapphires.  By deviating from reality, Mell succeeds in creating a feeling that is closer to the actual experience of witnessing nature first-hand than any photograph. 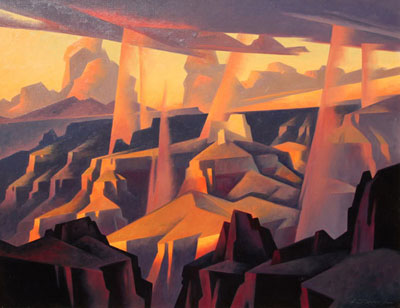 The Southwest lends itself particularly well to Mell's approach, since the region is renowned for dramatic sunsets and storms that can deliver dazzling light shows. Some of the Arizona artist's canvases depict recognizable sites such as the Grand Canyon, Monument Valley, and Lake Powell, while others are only loosely inspired by actual locations. Of the latter, Mell says they are invented from fantasy mood, vague recollections and impressions that come from the visual store-house of images he has absorbed through the years.

"There are certain moods to the landscape, and sometimes that's the main focus, to capture a modd rather than an actual depiction of (a place)," he says. "A lot of my more abstracted landscapes just kind of invent themselves as they go. Sometimes they're based on a sketch, or sometimes I'll just sit down and put a few lines on a board and let them suggest something and see where it goes.  Some kind of invention happens, almost like autopainting, but in a calculated way. Once you  have enough confidence that you're not nervouse about where it will go you can have freedom and fun with it." 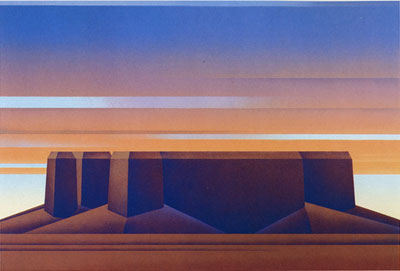 Mell's habit of embracing variety in his style, subjects, and media keeps him fresh and challenged. Stylistically, he moves fluidly between the polar opposites of realism and abstraction, but never goes completely in either direction. One of the distinctive qualities in Mell's work is that he distills the complexities of nature into essential geometric forms - to a greater or lesser degree depending on the painting.  On the other hand, no matter how abstracted, his subjects always remain recognizable. Mell's subject matter mainly consists of landscapes and florals, but the artist also paints cattle, horses and cowboys on occasion. And though oil painting is his primary medium, he has been sculpting since the mid- 1980's. In 1993 he completed Jack Kife, a monumental sculpture of a cowboy on a bucking bronco that now greets visitors to downtown Scottsdale, Arizona.  Currently Mell is working on another major public project, a 40-inch bronze sculpture of the mythical phoenix bird for the Phoenix Sister Cities Commission.

Besides finding variety enjoyable, Mell makes use fo it to generate a visual dialogue in which he can explore ideas that will surface later in another style, subject or medium. For instance, many of the artist's friends thought his paintings of flowers - which started in 1998 witha batch of pink gladiolas from a local nursery - were a fleeting diversion.  However, Mell continued painting them, and a rainbow array or roses and crimson and yellow cactus blooms now thrive in his studio.  The floral paintings are an important focus of this work and have corss-polinated ideas by introducing a new palette of oclors into his landscapes. 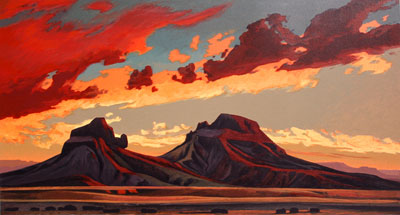 Mell makes reference to the floral and landscape palettes in a separate discussion of the translucency and the inner glow that are trademarks of his paintings.  "Contrasts are what make things come alive," Mell says. "For example, if you do a yellow flower and you put in a dark purple background, which is the opposite on the color wheel, that color makes the yellow come alive more than any other color. Plus, you're dealing with light that illuminates the flower. So you have two things going for you to create a glow."

Several of his landscapes likewise, have deep purple clouds against patches of mustard yellow sky. "I just sort of invented this color scheme, but I'm sure it's out there," he says.  "I don't recall ever seeing a purple sky like that, but then again, you've got this purple against yellow and it kind of makes it work.  And you can tell it is casting purple light on the land." 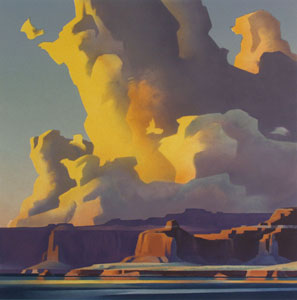 Mell makes his studio in a converted 1930's era grocery store in the Coronado historic district of downtown Phoenix, just three blocks away from the hospital where he was born in 1942.  The studio reflects the artist's varied interests and his penchant for collecting. Hanging on the walls are a sampling of his works by his favorite painters, including Maynard Dixon, Alonzo "Lon" Megargee, Thomas Hart Benton, Frank Tenny Johnson, Jimmy Swinnerton, and Richard Lillis. Visitors entering through the back door of the studio first encounter a gleaming black 1936 DeSoto Airflow coupe. He also owns a 1962 Corvette which he drives every year in the Phoenix Art Museum's road rally fund raiser.

Automobiles have been a passion all his life. Mell's boyhood hobby was building model cars and doing pencil and water color sketches of cars which led to drawings of other subjects.  After high school, he studied advertising and illustration at the Art Center College of Design in Los Angeles. In 1967, Mell accepted a job as a junior art director at a major New York advertising firm, but iwithin a year he became disillusioned, feeling his creativity was being smothered. He and a friend opened their own illustration firm in New York and became very successful, with clients of the caliber of Cheerios and RCA. Even so, three years later Mell still found life as a New York Illustrator to be repetitious and unfulfilling.

Mell accepted an offer to teach art classes one summer on the Hopi Reservation in northern Arizona, and the experience awakend a yearning to return to his roots. "Looking at the landscape with a fresh eye, all of a sudden there seemed to be a real magic to it," he recalls. "You have to go away sometimes to be able to appreciate it." 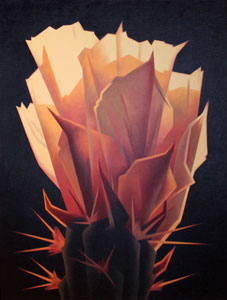