Dean Mitchell is featured in The West Select at the Phoenix Art Museum.

When the announcement was made in 2011 that the Cowboy Artists of America's annual show would relocate to Oklahoma City, the Phoenix Art Museum - which had hosted the CAA show for 37 years - had a new opportunity.  "It was time to take our annual exhibition in a different direction," says Jerry Smith, the museum's curator of American and western American art.

That direction quickly evolved into 'The West Select,' a new annual show that, says Smith, offers "a broader take on the West."  Its purview expanded beyond cowboy and Native American images to include contemporary western life, landscapes, still lifes, and wildlife; mediums like photography, watercolor, and drawing along withoils and sculptures; and even style sometimes veering toward modernism.  Last year's first show offered about 110 works by a roster of 31 top artists.  This year's edition, settling into a less-crowded time slot, includes four more artists in the lineup. 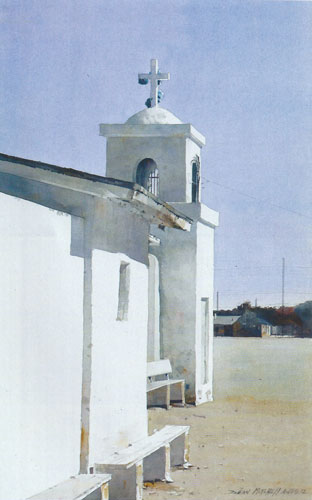 "We've only invited artists who we feel are at  the finest moments in their careers, capable of producing something worthy of being in our collection," says Smith.  That's a lofty goal  But the results of the 2011 show bear it out, with four of those works eventually purchased by or donated to the museum itself.

... the exquisitely composed realistic watercolors of Dean Mitchell, ... portray, he says, "vacant homes and buildings that once had a voice in their community, from the reservation area near the Phoenix airport."