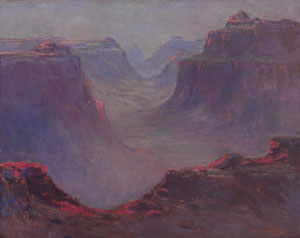 Dawson Dawson-Watson was born in the rather fashionable London suburb of St. John's Wood to the popular English Illustrator John Dawson-Watson. Enrolling in Diocesan Grammer School in Southsea at the age of eight, Dawson-Watson's progress in his art classes was terrific and, by the age of fourteen, he was so far ahead of the rest of class in painting live models that he branched out into china decoration to keep himself interested.

It was around this time that he met Mark Fisher, an American artist living in the UK. The two became inseparable, and Fisher began teaching Dawson Dawson-Watson the finer points of oil painting. Having shown great promise in local shows, Dawson-Watson was sponsored by a local brewer to train in Paris under Carolus Duran, John Singer Sargent's teacher. Having become quite taken with France, his next stop was Giverny, where he would live the next five years, only a short way from the home of Claude Monet (though Dawson-Watson claimed the two never met).

An American friend convinced Dawson Dawson-Watson to move the United States, and he was hired as the Director of the Hartford Art Society in Connecticut. After four years in the position he quit to return to England, but soon found himself States-bound again and eventually living at Byrdcliffe Colony, a center for the American Arts and Crafts movement. After Byrdcliffe, Dawson-Watson moved to St. Louis, where he taught at the School of Fine Arts for eleven years.

Dawson Dawson-Watson's connection to the West began in St. Louis, where he served as the art director of a pageant in Brandesville Missouri, putting him in contact with wealthy Texans who would eventually persuade him to move to San Antonio. Spurred on by his success in the Edgar B. Davis National Competition, whose $5,000 prize (the largest in the nation at the time) he won three years running, Dawson-Watson branched out in his subject matter and began painting numerous canvases of desert flora, mostly cacti. Cacti led to landscapes and landscapes, eventually, brought him to the Grand Canyon, the subject of many of his best late works.