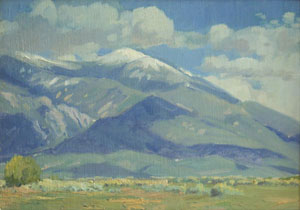 Myers was born in Jefferson, Oregon, the son of a hops farmer.  The family moved to southern California when Myers was about seventeen, and he enrolled in art school in Los Angeles.  After operating the family's Oregon farm for several years, he had earned enough money to attend the Art Institute of Chicago where he studied under John Vanderpoel and Frederick Freer from 1905 to 1910.

Upon graduation, Myers married Alice Clark, a fellow student and first female graduate in architecture from the Art Institute.  Myers joined the Chicago Society of Artists, showed his work, and executed a mural commission in Chicago before moving back to Oregon in 1913.  Shortly thereafter, an Art Institute instructor, Charles Corwin, invited Myers to San Francisco to help restore his 1888 Cyclorama painting, The Battle of Gettysburg, which was to be shown at the Panama-Pacific International Exposition in 1915.  The Myers moved back to Chicago in 1918 and then to San Diego in the early 1920s where he created murals for the US Grant Hotel.  Myers continued showing his work in Chicago at least until 1921.

Datus, Alice and their two children spent the summers of 1923 and 1924 in Santa Fe and Taos.  They moved to Santa Fe the following year, taking up residence in "Artists Row" on Camino del Monte Sol.  Myers was known for both landscape and portrait painting.  He worked in oil and watercolor, and in the 1930s he became particularly interested in drawing with graphite and colored pencils.  These soft, carefully nuanced drawings comprise the largest share of his later work.

In 1934, Myers was appointed Field Coordinator of the Indian Division of the New Deal's Public Works of Art Program.  His job was to visit the Pueblos and reservations to recruit Native painters, potters, and weavers to work in the program which was located at the Santa Fe Indian School.  In 1939, Myers created his own painting under a subsequent New Deal project the Federal Art Program, a mural for the Post Office in Winnsboro, Louisiana.

In 1953 Myers, now divorced from Alice, moved to Shasta Springs, California where he was associated with a school owned by the I AM Activity, a religious organization which he had joined in Santa Fe.  The Texas Memorial Museum in Austin mounted a retrospective exhibition of Myers' work in 1973.