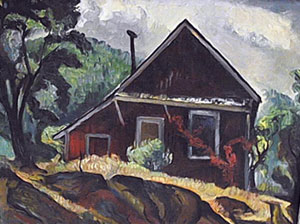 Charles Surendorf painted regionalist style oils and watercolors, but is best known for his large output of wood and linoleum engravings.

Surendorf was born in Richmond, Indiana and received his art training at the Chicago Art Institute, the Art Students League, and Ohio State University.  He left the Midwest in 1929, living in Los Angeles before settling in San Francisco in 1935.  He became active in the Bay Area art community, attending classes at Mills College and organizing the first San Francisco Art Festival in 1946. 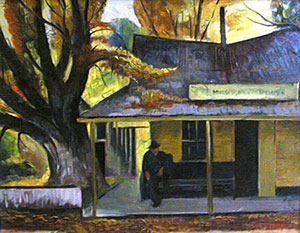 Beginning in 1937, Surendorf made frequent trips to the gold mining region of the Sierra foothills, especially the old village of Columbia which was then a ghost town.  The decrepit buildings and overgrown streets appealed to his social realist aesthetic sensibilities.  These ghost town images and the hard working locals struggling in the Great Depression became his primary subjects.  Surendorf traveled frequently, and was especially fond of New Orleans and New Zealand which occasionally made their way into his prints and paintings.

After being divorced from his first wife in 1946, Surendorf moved permanently to Columbia and set up a studio and gallery.  He also co-founded the short-lived Mother Lode Art School.  About the time he moved to Columbia, the State of California started buying land and buildings in the town with plans to make it an historical park.  In 1967 the State evicted Surendorf from his studio gallery because he refused to wear period clothing as was required of all retailers in town.

Surendorf's style is often compared to that of Thomas Hart Benton due to the rhythmic drawing which sometimes twists and distorts its subjects.  However, his paintings usually exhibit much stronger color than what was preferred by his regionalist predecessors.

From 1934 to 1971, Surendorf produced 250 prints.  The earliest were woodblocks, but he soon took up wood engraving and then linoleum engraving, using hardened linoleum cut with steel wood-engraving tools.  He exhibited widely around the United States and won a number of prizes, especially for his prints.  In 1959, Art Digest named Charles Surendorf one of the top twenty-five woodblock artists in the world.