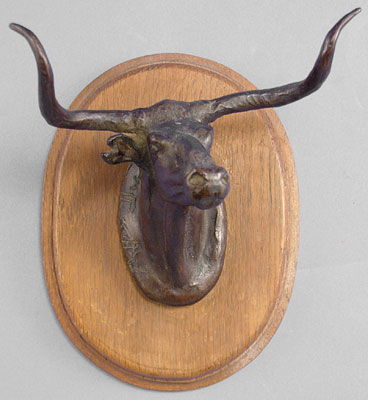 Born Charles Marion Russell in the town of Oak Hill near St. Louis, Missouri, Charlie dreamed of being a cowboy almost from the beginning of his life. As a child he listened to stories told by his grandmother, Lucy Bent Russell, of the adventures of her brothers, the Bent Boys, who were famous frontier adventurers. He also spent a great deal of time down at the docks along the Mississippi River listening for stories from the explorers and fur traders that passed through town. Russell's childhood was the beginning of an intense interest in art. He was forever drawing and making small figurines out of any materials he could find. Impressed with the skill of this small boy, a family friend gave Charlie a slice of beeswax. From that day on he was known to carry wax which he would pull out of his pocket and create small models for his friends.

The Russell's were a prominent family in the St. Louis area. Charlie's great grandfather had been Chief Justice of the Supreme Court of Missouri Territory. His father was the wealthy owner of Oak Hill Firebrick and Tile Works and had hopes for his son to take over the family business one day. Charlie was bent on discovering his own version of the "wild west" and had no interest in the business of his father or even in his school studies. When he was fourteen he ran away to the wilds of Montana, but was returned home. In the hope that boarding school would change their son's mind, the family sent him to a military school in New Jersey where he lasted only a semester.

Finally his parents realized there was to be no dissuading their son from following his dream, and they sent him to a friend's ranch in the Judith Basin of Montana to spend the summer. This was a few days before Charlie's 18th birthday in 1880. He remained in Montana for the next 46 years. 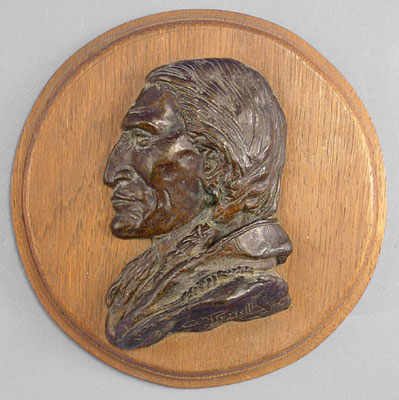 An important part of his introduction to the West was the year and a half he spent with an experienced hunter named Jake Hoover, who taught him the habits of animals and the secrets of nature in the wild. Russell then worked for cattle ranches for several years as a night herder. That left him time to paint the colorful activities of life on the ranch in the daytime. In February of 1887 the course of Russell's artistic career made a sharp upward turn. After a particularly hard winter a friend of Charlie's was trying to describe the condition of the herd to his boss in a letter. To illustrate, Charlie did a small drawing of a half-frozen steer surrounded by wolves. He called it, "Waiting for Chinook." The ranch owner in Helena, Montana showed the drawing to several of his friends and acquaintances and eventually commissions started rolling in. His first national exposure came from one of his sketches appearing in Harper's Weekly in 1888.

Throughout his life Charlie had a reputation for being a friendly generous person. He often gave his artwork away to his friends and had no concept that it could earn him a living. In 1896 he married Nancy Cooper and within the year they moved to Great Falls with the idea it would be a good place to market Charlie's work. They didn't find people interested in cowboy and Indian paintings, so they began to look for commissions back east. Nancy was an excellent business manager of her husband's art and very soon they were making a very good living from his paintings.

All of Charlie's years as a cowboy enabled him to realistically tell the legends of the West. He was an admirer of the Native Americans and their way of life. In the winter of 1888-1889 he lived with the Blood Indians in Canada. By 1892 Russell was a full-time painter. He had the remarkable ability to recreate on canvas his memories of dress and minute detail of things such as beading patterns on moccasins. In 1911 he had a one-person exhibition in the Folsom Gallery in New York. He once sold a painting to the Prince of Wales which now hangs in the Buckingham Palace. Selling for $10,000 it was the most anyone had ever paid for the work of a living American artist. In 1925 he was honored by the Corcoran Gallery of Art in Washington, D.C. with a special exhibition. 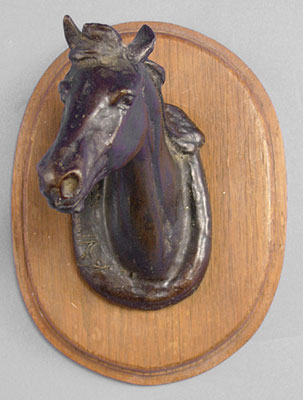 Besides being a painter Russell was the author of many stories and books including the Rawhide Rawlins Stories and Trails Plowed Under. In 1989 he cast his first bronzes at the Roman Bronze Works foundry in New York. His sculptures are considered by some to be better than his paintings. Many of his cast bronzes are in museums throughout the world. He was the first "western" artist that actually lived most of his life in the West.

In 1920 Charlie's health began to weaken. The Russells now spent their winters in Pasadena to escape the cold in Montana. Charlie died of a heart attack on October 24, 1926 at age 62. On the day of his funeral all the children were released from school in Great Falls to watch the funeral procession. Considered the premier artist of the American West by many, Russell's works may be found in many collections including the C.M. Russell Museum, The Montana Historical Society, Amon Carter Museum, Gilcrease Institute and the National Cowboy Hall of Fame. His mural entitled, "Lewis and Clark Meeting the Flathead Indians" hangs in the Montana State Capitol Building in Helena.