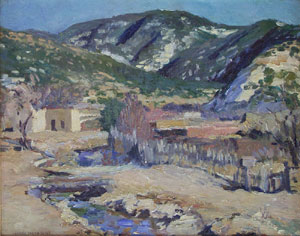 Charles Berninghaus, son of artist Oscar E. Berninghaus, was born in St. Louis Missouri on May 19, 1905. When he was five years old, he made his first trip to Taos, New Mexico with his father on a sketching trip. His mother died in 1913, and Charles and his sister Dorothy started spending the summers with their father in Taos. Since Oscar was already a well-known artist and founder of the Taos Society of Artists, Charles was brought up around lots of artists and an abundance of art materials to play with. 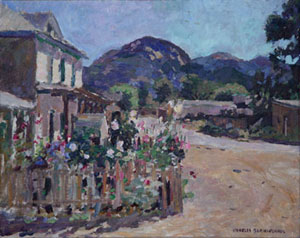 Oscar encouraged his son to be an artist, but was aware of the importance of letting his son find his own style. Charles went to St Louis schools through high school and then attended the St. Louis School of Fine Arts, the Art Institute of Chicago and the Art Students League in New York. During this time, he still spent summers in Taos and finally moved to Taos for good in 1927. He helped his father paint a mural for the Missouri State Capitol in 1923. Charles eventually became a successful painter, mostly working plein air in an impressionistic style. He painted very rapidly and normally used only one brush which he would wipe clean before each change of color. Declaring, "Why paint anything unpleasant?" Berninghaus usually painted the landscape, trees, flowers and streams of New Mexico. 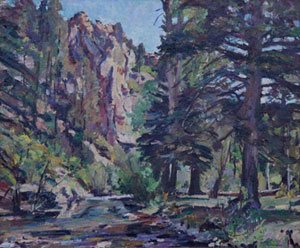 Charles first exhibition was in 1922 at the Museum of Fine Arts in Santa Fe, when he was 17 and had not yet graduated from high school. He participated in many other exhibitions in the years to come including the Art Institute of Chicago, Pennsylvania Academy of Fine Arts, National Academy of Design, NY and the Museum of History and Art, Los Angeles. In 1999 the Panhandle Plains Historical Museum mounted a collection of over 60 works from Charles and his father Oscar's work. Charles' work became more abstract as he got older, probably because he didn't believe in getting prescription glasses. He lived on very little money and bartered for much of what he wanted. He even traded a painting in 1938 for a Nash automobile from Mrs. Nicolai Fechin. Berninghaus died on January 1, 1988 in Taos, New Mexico. 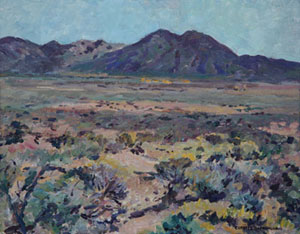 Charles Berninghaus, Sage Near Taos, Oil on Canvas Board, 16" x 20"