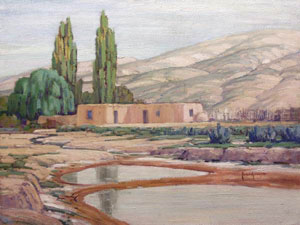 Carlos Vierra was born and raised in Moss Landing, California, near Monterrey. He studied art under Gottardo Piazzoni at the Mark Hopkins Institute before leaving San Francisco on a grueling six-month trip around Cape Horn to New York City. Once there, he worked hard to become a cartoonist, a growing artistic field at the time. After much struggling, his art begin to comfortably sustain him, though the comfort would be short-lived.

In 1904, Vierra contracted a potentially deadly lung disease. At the urging of his doctor, he moved to Santa Fe, whose climate was thought to be ideal for those recuperating from lung ailments. In Santa Fe, Vierra found himself the only western artist in a compact, fascinating town of varied ethnic and cultural makeup. One of his sustaining passions would be the architecture of Santa Fe and the surrounding pueblos, which he was commissioned by Frank Springer to paint in 1914, the beginning of a process that would eventually lead to a concerted preservation effort being launched to maintain the historical architecture of the Santa Fe area. 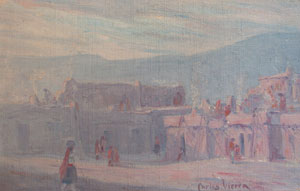 Vierra's primary form of income was a photography studio he opened on the Plaza. He also accepted painting commissions, doing mural work in San Diego's Balboa Park and renovation work at the Palace of the Governors in Santa Fe. As he was the first white artist in Santa Fe, he is also credited with forming the Santa Fe Art Colony.