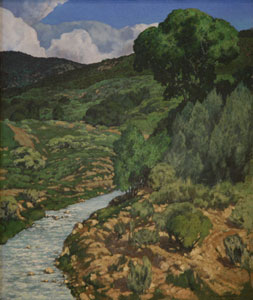 Raised in Danville, Illinois, Carl Woolsey moved with his family to Indianapolis in 1921 and then to Long Beach, California in 1922.  By this time, Woolsey had taught himself to paint, but he also received brief instruction from the artist Henry Richter in Long Beach.  In 1925 Woolsey's father, Charles, moved the family back to Indianapolis where Carl continued his self-instruction in fine art. 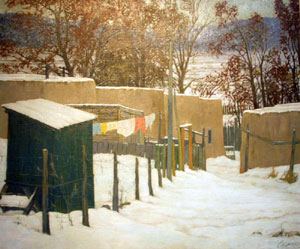 Woolsey became intrigued with Taos after viewing an exhibition in Indianapolis of paintings by Walter Ufer, a founding member of the Taos Society of Artists.  He soon started a correspondence with Ufer who invited him to Taos.  Woolsey arrived there with his wife and two children in 1927 and immediately started to work painting in Ufer's studio, under the mentorship of the older artist. 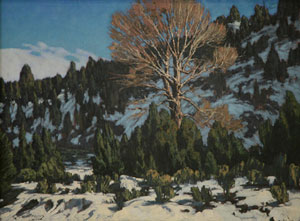 Woolsey's skills blossomed under Ufer's informal instruction, and he enjoyed almost immediate critical success.  His paintings were juried into the Hoosier Salon in 1927 and into the National Academy of Design Winter Show in 1928.  In the following years he showed in twelve more Hoosier Salons, and participated in most National Academy exhibitions until 1936. 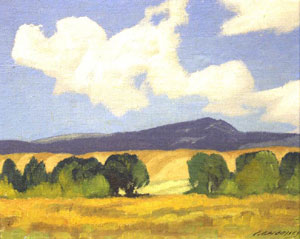 Woolsey's quick success in Taos enticed his brother Jean to leave for Taos in the summer of 1928.  The brothers rented the former studio of Kenneth Adams where Carl painted and Jean operated a frame shop.  Later that summer, their older brother, Wood, arrived with their parents and younger sister.  Wood had been working in Indianapolis as a commercial artist but saw Taos as an opportunity to become a "real" artist.  Charles Woolsey saw the promise in both young artists and became their manager while also assisting in Jean's frame business.

Carl and Wood Woolsey's careers flourished together in Taos.  From 1928 to 1930, they sold seventy-five of the eighty paintings they made.  In addition to the Hoosier and National Academy shows, Charles arranged exhibitions for the brothers in Chicago, Indianapolis, and the Milwaukee Art Institute.  Carl also showed at the Corcoran Gallery, the Pennsylvania Academy of Fine Art, the Museums of Art in Akron and Dayton, and the Stanford Gallery in Palo Alto, California.  Carl won many prizes while still in his 20s and 30s including the National Academy's prestigious Hallgarten Award. 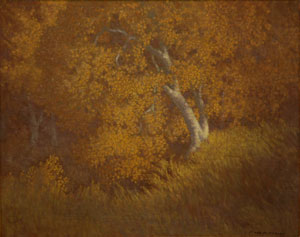 Throughout his career Carl Woolsey painted landscapes almost exclusively, with even small figures rarely appearing in his work.  He used naturalistic color and painted in a traditional, representational style but his often complex compositions clearly owe a debt to Walter Ufer and to the eastern modernists.  With a dappled brush and careful control of light and shadow, Woolsey emphasized shape, contour and texture which also gave his best paintings a slight modernist edge.

Feeling the economic pinch of the Depression, Charles decided to move back to Indiana, perhaps because most of his sons' work was sold in the Midwest.  Carl followed in 1934, being ever obedient to his father's wishes.  After his divorce in 1940 he followed his parents again when they moved to Tunkhannock, Pennsylvania.  Returning from service in World War II, Carl rejoined his parents and brother, Wood, now living in East Stroudsburg, Pennsylvania.  He tried painting for a time in New Haven, Connecticut, but returned to East Stroudsburg in about 1950 to share a studio with Wood.

In the years following the War, Carl continued to paint but did little in the way of exhibitions.  Modernism and abstract expressionism were receiving the attention, and his style of regionalist realism was no longer in demand in the large museum and gallery shows.  In the last years of his life, Carl applied his dappled brush technique to miniature paintings, expanding his subjects to include portraits, figure, and genre scenes.   Carl Woolsey died in East Stroudsburg in 1965.