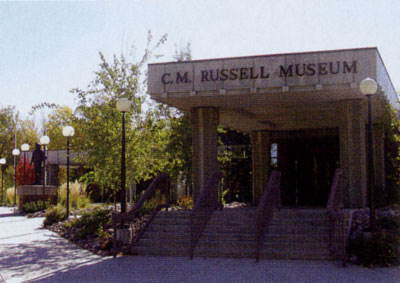 The American bison represent more than a 2,000-pound shaggy mammal that once inhabited the Grasslands of the United States and Asia in massive herds. To Native Americans, bison represented sustenance - food, shelter, protection, and an economic basis.

The C.M. Russell Museum addresses the historical and cultural role of bison, for all people, in the Northern Plains between 1800 and 2007 in it upcoming installation of The Bison: American Icon, Heart of Plains Indian Culture. This new permanent exhibition opens to the public on Dec. 6, 2008, and, for the first time, spotlights the museum's substantial collection of Plains Indian cultural artifacts, including those owned by Charles M. Russell himself that he collected and used as reference material for his paintings. Such items include a traditional headdress and a bison horn hatrack that Russell owned. 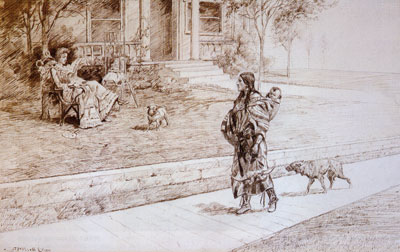 The Bison features over 500 objects, including Northern Plains Indian artifacts such as clothing, regalia, tools, and weapons with a wide variety of objects crafted from bison and works of art utilizing bison imagery. Two and 3-D artwork by Charles M. Russell, as well as contemporary works of art, can also be seen. This exciting and interactive exhibition also examines the ways in which this impressive mammal has emerged as an American icon.

"The staff of the Russell Museum and I began working to develop an exhibition that would not only highlight these collections, but also have some relevance to Charles Russell, Montana, and the Northern Plains," says Anne Morand, the museum's Chief Executive Officer since 2004. "The idea of using bison as a focal point came from the nature of the collections and the fact that Russell used the bison as important subject matter, including over 75 paintings of Plains Indians hunting bison." 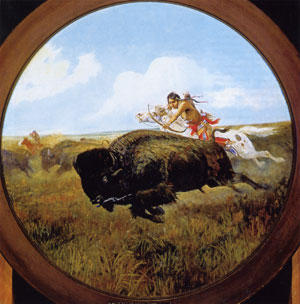 Among the exhibition highlights is a full-size diorama of a bison hunt from horseback by a Plains Indian hunter.

"The diorama offers visitors the opportunity to see just how large and powerful the bison is, as well as the amazing ability of the hunter using a bow and arrow!" says Morand.

The Bison has attracted an unprecedented loan of 37 objects from the world-class collection of Plains Indian materials at the Museum of the Plains Indian in Browning, Montana. The exhibition examines the bison's importance not only in the lives of Plains Indians, but to a growing 19th-century economy; addressing the animal's sudden decimation and eventual resurgence. With regard to the Northern Plains, the exhibition traces the bison's transformation from everyday resource to iconic symbol.

Historic Photo of Charles M. Russell in a traditional headdress

"Visitors will come away seeing that the adaptive Plains Indians survived, as did the bison, through important conservation efforts that began in the 19th century and continue today," says Morand. "The exhibition includes a look at contemporary art forms created by Plains Indians, helping to debunk the still-prevalent myth that American Indians are a 'vanishing' people.

An 18-member project team of advisors including scholars, artists, tribal representatives, archeologists, art historians, biologists, anthropologists, and curators from across the nation helped to shape this remarkable exhibition, which was made possible through landmark grants totaling $1.5 million - the largest amount of money received by the C.M. Russell Museum for any exhibition. Funding came from the National Endowment for the Humanities, the National Endowment for the Arts, the M.J. Murdock Charitable Trust, the Annenberg Foundation, and the Institute of Museum and Library Services, along with additional support from private foundations, groups and individuals.

The Bison will be installed in three galleries, including one new gallery space, located on the museum's lower level, and will serve as a dynamic, ongoing resource for visitors. 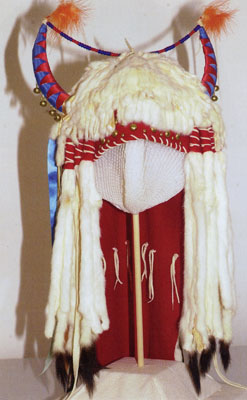 This traditional headdress belonged to Charles Russell and the artist can be seen wearing it in the photo shown above in this article.