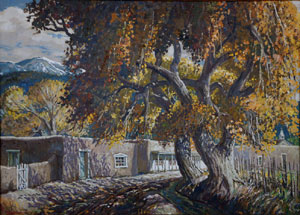 Born in 1912 in Gallup, New Mexico, Ben Turner was one of few native New Mexico artists to become a prominent commercial success in the first half of the twentieth century. He also was a direct descendent of Joseph Mallord William Turner (1775 - 1851), the famous English marine painter.

Ben showed a great deal of interest in art as a young child and enrolled at the University of New Mexico and then the Chicago Art Institute upon graduation from high school. He created a daily comic strip named "Jerry n Jake" that ran in over 48 newspapers around the Southwest. After his formal studies, Turner headed to Taos where he met and studied with Eanger Couse, Ernest Blumenschein, Victor Higgins and Joseph Henry Sharp. 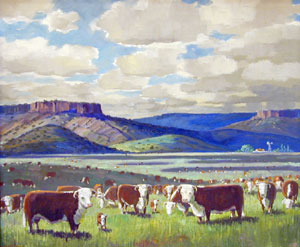 During World War II, Turner was a staff artist and established the 15th Air Force Staff Artists. He painted drawings on site of the battlefields in Bari, Italy and the Ploeti Fields of Romania. These drawings were published in several magazines including Look and Life.

He established studios in Santa Fe and Taos, New Mexico, in Redstone, Colorado and in Mazatlan, Mexico, where he died February 3, 1966. Throughout most of his life he practiced a style of reacting spontaneously to his subject without preliminary drawing. Heavy brush stokes and thick paint gave life to the popularity of his adobe buildings, aspens, cottonwoods, and mountain scenes as well as floral still life arrangements.

His work was exhibited in the Fine Art Gallery at the University of New Mexico and is in the permanent collections of the Library of Congress, Washington, D.C. and the Museum of Fine Art in Santa Fe. 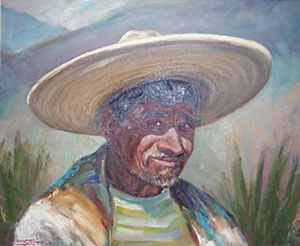