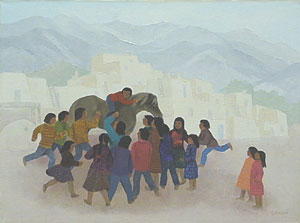 She studied at the Norwich Connecticut Art School, in Brooklyn at the Pratt Institute, and the Art Students League in Woodstock, New York. Adventurous, especially for a woman of her time, she and a friend bicycled through Brittany gathering material for illustrations.

In 1925, she went to Taos, New Mexico, where she lived with her artist husband, Howard Cook, and painted joyous Southwest landscapes and genre depicting the seasons of rural life. After World War II, her work became more surrealistic. She also became known for her holiday card and children's book illustrations.