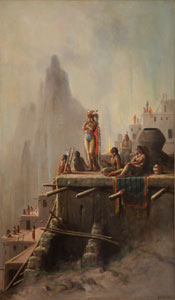 ADM Cooper was a popular and respected northern California artist who specialized in Native American genre painting and other scenes of the vanishing west.

After studying art at Washington University, Cooper made his own explorations through western territories, living with Indians and recording his experiences in drawings and paintings.  He spent two years in Boulder, Colorado drawing for Frank Leslie's Illustrated Newspaper, and making easel paintings of Indian subjects and western landscapes.  At age 24, Cooper moved to San Francisco and adopted the life of a bohemian artist, setting up his first studio in the city's Latin Quarter.  His reputation grew quickly and by the early 1880s he was selling his paintings in the eastern United States and in Europe.

Cooper moved to San Jose, California in 1883, eventually building an elaborate studio in the Egyptian style.  His contemporaries considered him one of the most important artists in California and his paintings were purchased or commissioned by members of the California aristocracy, including Mrs. Leland Stanford.  Cooper's canvases commanded high prices, and one large canvas, Trilby, named after a DuMaurier novel, is said to have sold for $62,000 in the 1890s.

Throughout his career Cooper painted scenes of the frontier and Native life, especially Plains Indian encampments and buffalo hunts.  He decried Federal policies toward the Indians and, like many artists of the time, he felt an urgency to capture the ways of a "vanishing race."  However, Cooper's paintings were by no means literal documents of specific people and places.  They were highly romanticized generic images intended to elicit favorable emotions about the "noble Indian."

Cooper heightened the romantic mood with dramatic shadows and heavy, dark atmospheric effects that often obscured the background (and sometimes the foreground) of the view, focusing attention on the carefully drawn subjects while downplaying their context.  His technique was similar to tonalism, but most of his paintings cannot be classed as such because they are often full of movement and activity.  In his later years, Cooper increasingly painted landscapes, allegories, and historical subjects.  His brushwork loosened, and some of the allegorical paintings, in particular, have an impressionist quality.

Cooper was notorious bon vivant and his penchant for drinking and carousing raised eyebrows among the social class that purchased his work.  It was said that he paid many bar bills with paintings of nude women, and many establishments in the area featured one or more of his canvases.  He also was known as an exceptionally generous, polite and cultured man with an aristocratic bearing.  Cooper was married for the first and only time in 1919 at age 62 to the daughter of a family friend who was 26 years his junior.