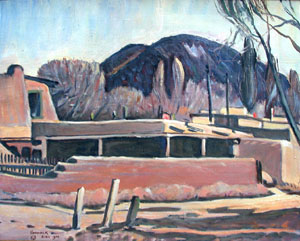 Haddock was born near Clements, California in the Sierra Nevada foothills. In 1914 the aspiring teenage artist met Maynard Dixon who became his lifelong mentor and friend.  Haddock attended the San Francisco Art Institute for one month in 1921, but most of his training resulted from working informally with Dixon.  He worked both in oil and watercolor, painting landscapes almost exclusively. 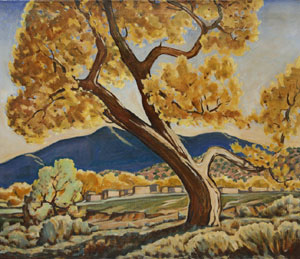 Starting about 1916, Haddock supported himself as a baggage and ticket clerk for the Southern Pacific Railroad, then the Western Pacific, and finally the Santa Fe Railway, staying with the latter for 29 years.  In 1922, he set up a studio in Stockton, California and began exhibiting his paintings.  He had his first one-man show at the Haggin Memorial Museum in Stockton in 1931, and participated in exhibitions in San Francisco and Oakland in the late 1930s.  In 1942 he showed at the MacBeth Gallery in New York and in a traveling show of New Mexico watercolorists. 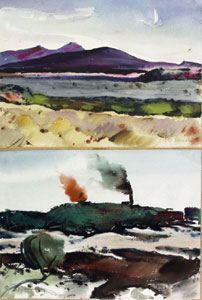 Haddock and his wife, Ira, first visited Santa Fe in 1929 and moved there in 1947.  They bought a second home in Prescott, Arizona in 1962.  In Santa Fe, Haddock earned a living by framing the paintings of other artists, and he had shows at several Santa Fe galleries in the late 1960s and 1970s.

Despite the occasional shows, Haddock declined to sell most of his paintings.  He had worked for the railroad as a night clerk so he could paint during the day without the pressure or influence of commercial success.  He considered all of his paintings to be learning experiences rather than finished products and, being an intensely private man, kept the work to himself.  Haddock often painted the same view multiple times, each time adding, omitting or emphasizing different elements of the composition.  During the 1950s he painted 200 four- by five-inch oils of the view from his framing shop window.  In his last decade he frequently reworked old paintings.  When Haddock died at age 85, hundreds of paintings-a lifetime of work-filled his modest Santa Fe apartment.