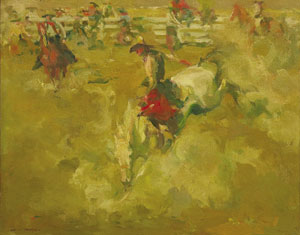 Armin Hansen was one of the most celebrated and respected West Coast marine painters of the twentieth century.

Hansen's first art instruction came from his father, Herman W. Hansen (1854-1924), the popular painter of Wild West imagery.  At age 17 he enrolled in the Mark Hopkins Institute to study with Arthur Matthews.  When the San Francisco earthquake of 1906 interrupted his instruction, Hansen left for Europe.  Instead of going to Paris where most of his contemporaries were studying cutting edge art movements, he enrolled in the German Royal Academy, to work under the German impressionists.  After two years of study and touring, Hansen signed on as a crew member of a Norwegian fishing trawler.  He continued life as a fisherman in the North Sea and North Atlantic for the next four years.

Returning to San Francisco in 1912, Hansen set up a studio and taught at UC Berkeley and the California School of Fine Arts.  The next year he moved to Monterey where he taught privately and began to specialize in painting seascapes, coastal views and, most especially, images of the hardworking local fishermen with whom he felt an obvious kinship.

Some of Hansen's earlier paintings suggest the influence of tonalism, although most of his production is considered post-impressionist, with strong colors applied in flat blocks with bold, free brush strokes.  He often favored a dark palette which probably derived from his instruction at the Royal Academy.  Hansen also is known for his great skill as an etcher.

Hansen exhibited widely around the United States and Europe, winning many prizes for both his paintings and etchings.  He was a co-founder of the Carmel Art Association, one of the best-know artists' co-operatives in America, and became one of its most respected teachers.  Hansen was elected to the National Academy of Design in 1925 and became a full member in 1948.