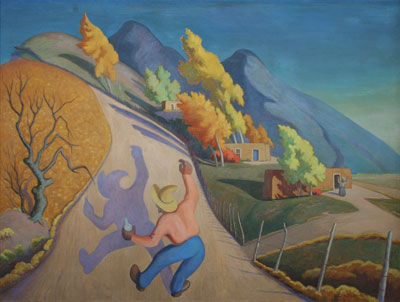 Albert Schmidt was an early member of the Santa Fe art colony, best known for his high-key modernist landscapes.

Schmidt was born in Chicago, the son of a physician.  He attended the Art Institute of Chicago for four years before enrolling at the Julian Academy in Paris.  In 1912 he married fellow student and Chicagoan, Marjorie Hanson, and the couple returned to Chicago the following year.

Schmidt exhibited at the Pennsylvania Academy of Fine Arts in 1911, the National Academy of Design in 1914, and the Panama-Pacific Exposition in 1915.

In 1921 Schmidt visited the Southwest and was so impressed with Santa Fe that he resolved to move there.  The next year, the couple arrived in New Mexico, settling in the village of Tesuque, just north of Santa Fe.  They asked Santa Fe artist and builder, William Penhallow Henderson, to design and construct their home.

Schmidt's early paintings are in the manner of the French Impressionists, but he soon developed a modernist style with simplified, sometimes angular drawing, and a bright palette clearly influenced by the Fauves with whom he worked in Paris.  He painted mostly in oil or pastel.  Schmidt's compositions employed the concepts of Dynamic Symmetry, developed by the artist Jay Hambidge, which use a proportioning system based on specific mathematical ratios including the Golden Section.

The Schmidts apparently were able to live on Marjorie's inheritance, and Albert did not feel compelled to actively market his work.  However, he did participate in many exhibitions at the Museum of Fine Art in Santa Fe from 1924 until his death, including twelve solo exhibitions.  The Museum held a memorial exhibition for Schmidt in 1958.  After Marjorie's death in 1992, her granddaughter inherited the estate and discovered a cache of hundreds of Schmidt's works in the garage of the Tesuque home.