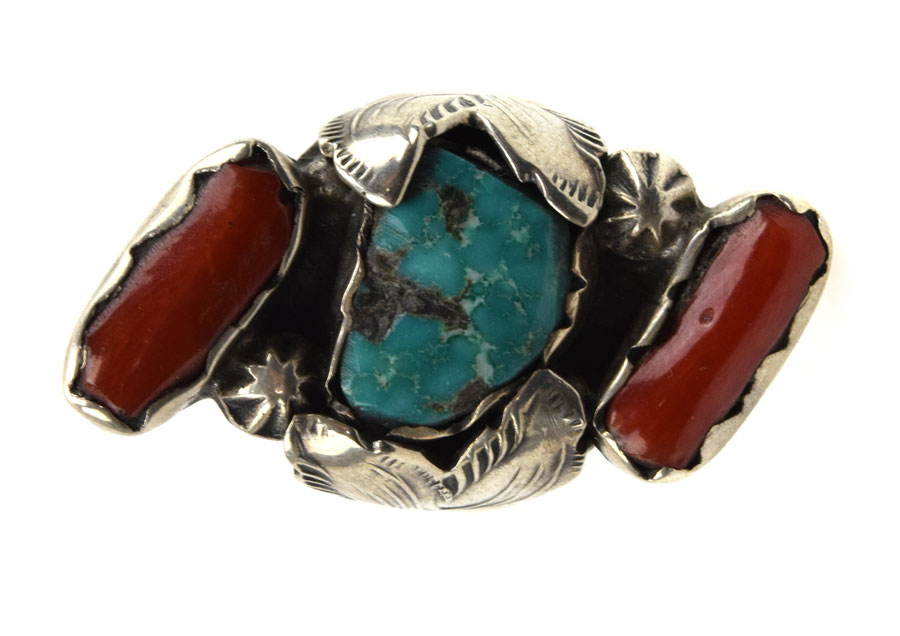 Zuni artists bring immense value and a rich narrative to the art of jewelry and turquoise.

The Zuni reservation is located in Northwest New Mexico’s high desert at 6,000 to 8,000 feet with a jurisdiction of 450,000 acres and a population of 6,400 people, most of whom live in the pueblo of Zuni. Often we think of the art from Zuni in terms of fetish carvings and magnificent white-slipped pottery. Frank Cushing of the Smithsonian collected much of the historical material in 1879. The most recent art form and the one that may have the most lasting legacy into the 21st century is their exquisite jewelry made of mosaic and finely carved turquoise stones. These design elements have become synonymous with Zuni jewelry.

Zuni silversmiths have a long tradition of making jewelry, learning the art form from the Navajo around 1872. The first Zuni pieces would be hard to tell from their Navajo neighbor's, as both tribes were using similar types of design and turquoise. The pieces constructed in this time frame include squash blossom necklaces, concho belts, bracelets, and rings.

Two of the earliest Zuni silversmiths, Juan de Dios (1882-1944) and Horace Iule (1899-1978), started producing jewelry around 1918, according to ethnologist John Adair's 1944 book The Navajo and Pueblo Silversmiths. Adair's book was the gold standard for Indian Jewelry collectors for many years.

Juan de Dios is one of the first silversmiths to start hallmarking his pieces with a JD in the 1930s along with Horace Iule, who signed his work H. Iule. Hallmarking of Indian jewelry was as significant a development as identification of the maker in raising handcrafted jewelry to the recognized form of art vs. craft. Today's collectors are highly interested and will pay a premium for pieces that are signed by these early silversmiths. Juan de Dios's unsigned material, while distinctive enough in its construction to be recognized, is not as sought after as works that have his JD hallmark. The de Dios hallmark is a rare find as he died in 1944 before most Zuni jewelry was hallmarked. 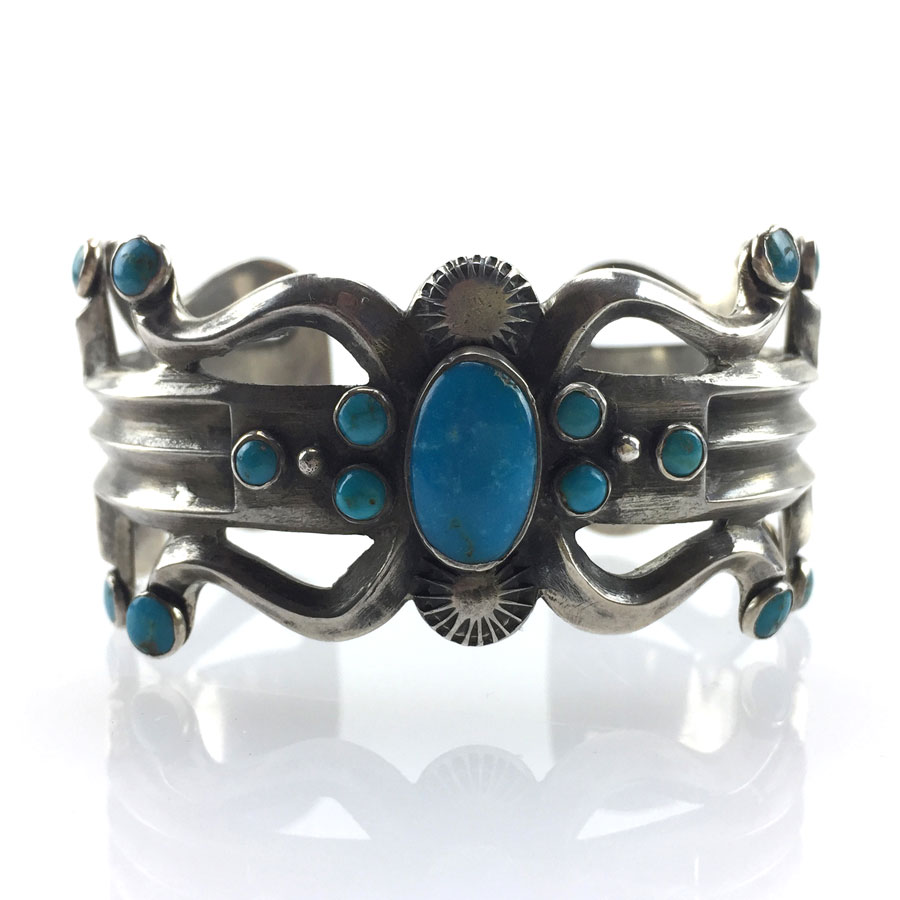 C.G. Wallace, the influential trader at Zuni, began first working in Rahm, New Mexico for the Ilfeld Company in 1918, and by 1919, he had his Indian Trading license and started working at Zuni. By 1928, Wallace owned the C.G. Wallace Trading Post, which became an institution for quality Native American jewelry. Wallace’s collection of Zuni jewelry was sold in Phoenix on November 14th,15th, and 16th in 1975 at Sotheby’s Parke, an auction that raised the bar for quality Zuni jewelry by setting world-class records across the board. This single auction set the tone for present-day jewelry prices and flipped Zuni jewelry from a craft to fine art. The Art Dealer Diaries podcast interview with Michael Haskell is a great listen that tells the back-story of how the auction nearly didn't take place.

Wallace also helped bring high quality raw natural turquoise stones to Zuni to be carved into fetishes and used by the silversmiths. Blue Gem turquoise, with its splendid deep blue hues, often with a hint of green, was the turquoise of choice. Leekya Deyuse (1889-1966) worked closely with Wallace and became the premier carver of his time. His fetishes, usually carved of turquoise, and to a lesser extent coral, are crafted in many forms, including bears, snakes, birds, and leaves. These fetishes are highly sought after and can bring in excess of $10,000 for an important piece of jewelry or intricate large carving. Wallace noted that in 1920, Juan de Dios started to make channel inlay work, and in 1928, we begin to see the emergence of Zuni designed Knife Wing God jewelry and cluster bracelets, both made by Horace Iule, which was a departure from Navajo jewelry. 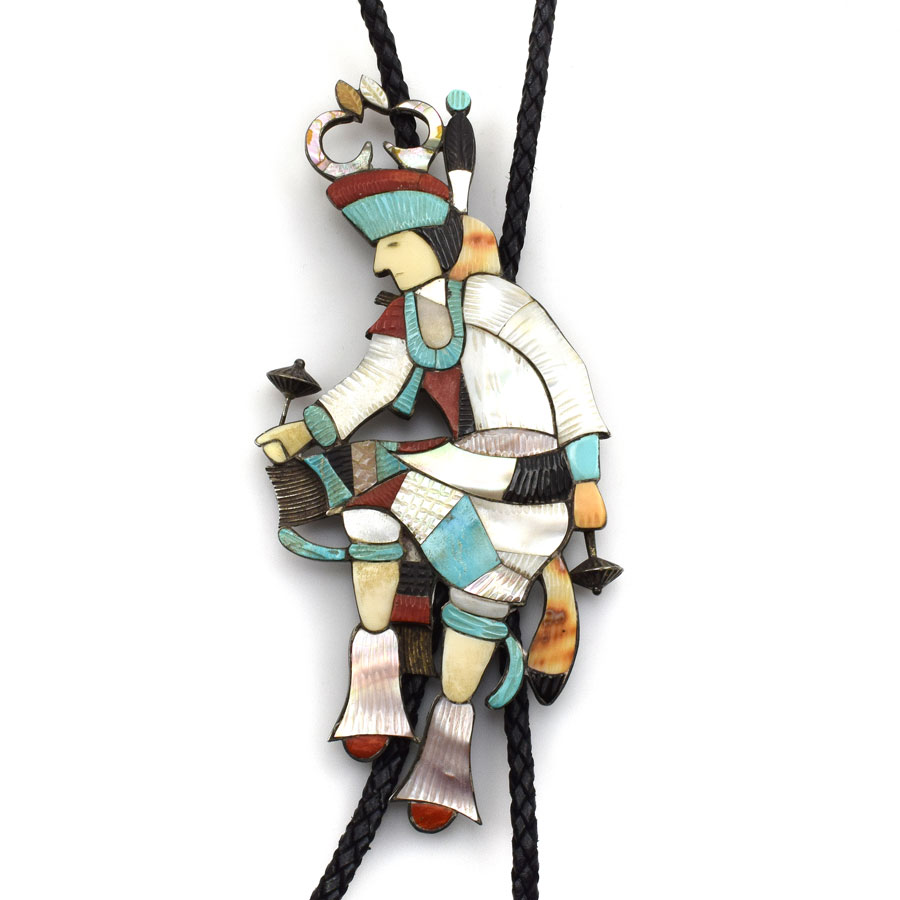 The type of jewelry Zuni collectors recognize is the fine petit point and needle jewelry that began to flourish in the 1940s. These types of pieces, as well as channel inlay, are the icons of Zuni jewelry. Other noted silversmiths at Zuni include Dan Simplicio (1917-1969), who was taught by his uncle Juan de Dios and worked with Leekya Deyuse, Leo Pablano (1905-1959) and Teddy Weahkee (1890-1965) at C. G. Wallace's trading post. Simplicio was known for his natural blood-red branch coral designs and was probably the first to incorporate coral as well as gold in his jewelry. These branch coral leaf designs with well-designed larger silver bezels are a mainstay look for Simplicio's work, which is usually unsigned.

Two artists who were known for their relief work were Leo Poblano and Edward Beyuka (1920-2002). Pablano, who worked as a BIA firefighter, was also one of the most talented Zuni stone mosaic silversmiths. He is known for boxes, stand-alone figures, and pins. His wife, the Zuni artist Ida Vacit (-1987), also helped with her husband's work. C.G. Wallace would often use Poblano's work combined with Navajo silversmith mounts. Poblano tragically died while at work on a wildfire in California, along with four other Zuni firefighters. Edward Beyuka, like Pablano, worked in relief figures, but unlike Poblano, Beyuka often signed his work's EAB and ZUNI. Recognized for his elaborate oversized bolo ties of Zuni dancers, Beyuka was also known to do complete large-sized Shalako dancer ceremonial bolos with all the figurines in relief style. 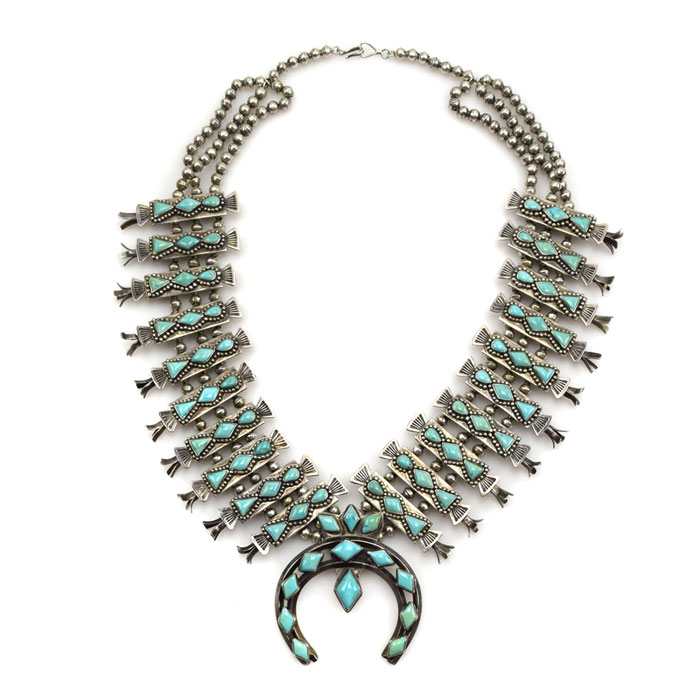 Working as a silversmith is often thought of as a man's occupation. At Zuni, there were dozens of women jewelers as well as husband and wife teams. It was not unusual to have a family pair where both individuals became acclaimed for their work . The earliest recognized female silversmith, whose work is highly sought after, is Della Casa Appa (1889-1963.) She began working as her husband's assistant before designing her work. At first, she would have to take her pieces to Wallace's trading post after closing so she would not to cause any issues with other male silversmiths. Not long after, she was recognized for her abilities more than her gender. Her elaborate inlay squash blossom necklaces with triangle box and bow construction and matching najas are her signature work.

Historic and Contemporary Zuni jewelry is highly sought after by collectors in today's market. Many of the jewelry pieces, even up into the early 1970s were not signed by silversmiths, making documented pieces more desirable. With the influx of fake Native American jewelry from Asia, it is vital for those collecting Zuni jewelry to purchase historic material from ATADA dealers or contemporary pieces directly from the artists or their galleries, so they are guaranteed to be authentic. The fake material, for the most part, is poorly constructed, often using stabilized turquoises or plastics. Having a hallmark, unfortunately, is not foolproof as being authentic Zuni. The forgers will make and mark the pieces with their hallmarks or replicas. To help prevent purchasing non-Zuni made jewelry, we recommend two excellent reference books on Native American jewelry: Bille Hougart’s Native American Southwestern Silver Hallmarks and Kim and Pat Messier's Reassessing Hallmarks of Native Southwest Jewelry: Artists, Traders, Guilds, and the Government. Zuni jewelry is one of the most recognized and collectible Native American art forms from the last 100 years, and an excellent choice when looking to begin collecting Native American jewelry.