Dennis Ziemienski found himself in an enviable position this summer: he had two show openings, one in Wyoming and another in New Mexico, and 10 days between the two of them.  Also of significance in his schedule: an upcoming show in Southern Arizona, which he had not started painting for yet, and his 25th wedding anniversary.

“So we turned the whole thing into a road trip,” Ziemienski says of his jaunt through the Southwest, from Wyoming south through Colorado, Utah, and Arizona, and then across to New Mexico.  “It was a nice little trip.  I took probably a couple thousand pictures and did lots of sketching.  It was so quick, I didn’t have any time for painting, though.”

The inspiration he found on the trip was later turned into his new exhibition The Grand Canyon State opening November 21 at Mark Sublette Medicine Man Gallery in Tucson, Arizona.

“I love the variety of Arizona,” he says.  “We’ve been before, from Southern Arizona and the Nogales area, all the way up to the Grand Canyon.  The state has so much to offer in terms of painting.”

Pieces in the show include Canyon Home, a 60-by-72-inch oil of a Navajo Hogan in Canyon de Chelly – “spectacularly jaw-dropping landscapes in every direction,” Ziemienski says of the location – and Route 66 Motel, featuring an old road sign on the still-famous highway.

One of the highlights of the show is Grand Canyon Pack Train, featuring the iconic imagery of marching pack mules framed against the expanding vista of the Grand Canyon’s majesty.  In Ziemienski’s portrayal of Arizona’s most famous landmark, he paints blues into the shadows, which complement the oranges and browns of his rock and soil. 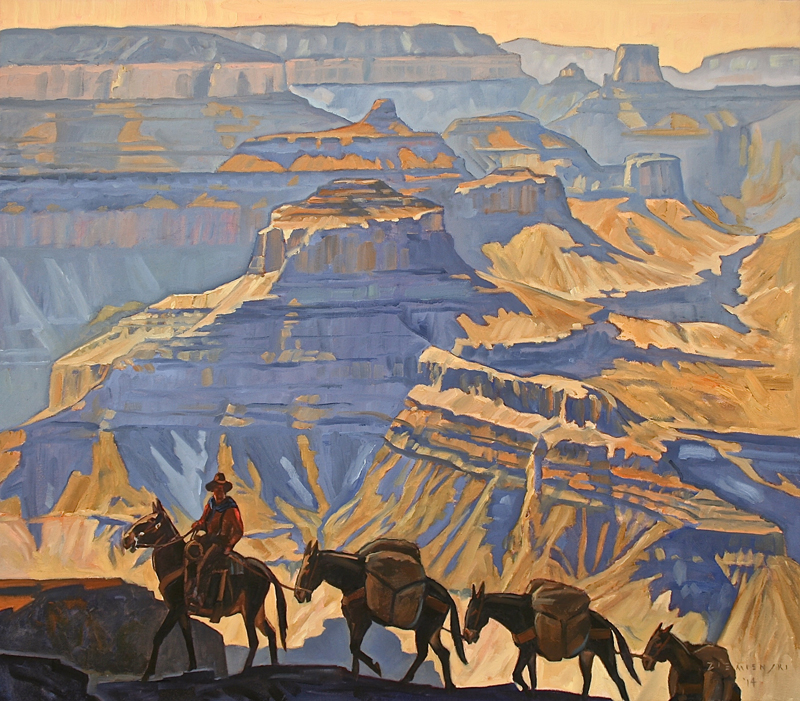 Another local that impressed the California painter was the Hubbell Trading Post.  The national historical site is known for its eclectic mixture of goods and artwork – and artists, including Maynard Dixon – that it funneled into northeastern Arizona beginning in 1878.  “When people think trading post, they think beer, chips and curious.  They think novelty stores.  The Hubbell Trading Post is entirely different,” he says.  “It’s really a trip within itself.  People could stay there if they were artists, as long as they painted a painting at the end.  That’s what drew Maynard Dixon there in 1904 to study the Hopi and the Navajo.  The place is just fantastic.”

Ziemienski originally intended his new show to be a landscape show, but, he admits, he’s happy he discovered so many new Arizona locations.  He adds, “Hopefully, I covered all the bases.”