In honor of the 40th anniversary of the Women’s Art Caucus, the national organization’s local chapter, the Indiana Women’s Caucus for Art, has organized an exhibition of members’ work that is on display now at the Hershberger Gallery on the campus of Goshen College.

The exhibit, “Four Decades of Women in Art,” showcases the work of current caucus members, as well as that of former members who were involved with the caucus in its early years. The work presented in the show is eclectic, encompassing pieces that range from traditional painting to innovative constructed objects. 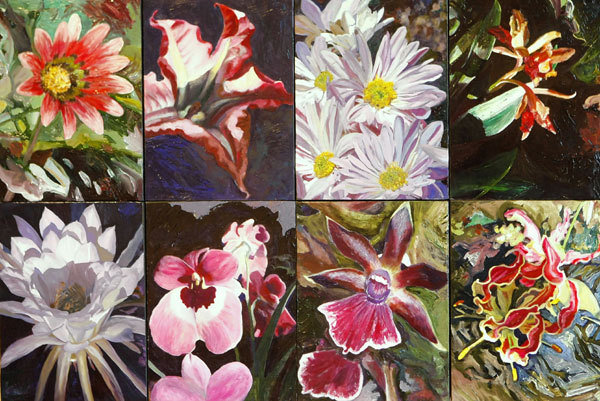 The influence of 20th century abstraction is prevalent here, too. Abstract Expressionism makes an appearance via the bold strokes of Natalie Klein’s paintings, including the nearly monochrome “Cool Convection.” Both Maureen Sylvia Lighthall and Maureen Trubac evoke Wassily Kandinsky, the former through her complex compositions of lines and color splotches, the latter with her brilliantly abstracted rendition of a Southwestern pueblo. The relatively subtle acrylic washes of Henderika Akkerman bring to mind painters such as Mark Rothko, but Tina Hepworth’s shimmering “Autumn” and “Summer” look back much further, all the way to the Art Nouveau of the early century.

The most intriguing part of the show, however, is the plethora of works crafted from materials other than paint and canvas. Media such as textiles, handmade paper and fibers come together in objects that often fall somewhere between the functional and the sculptural, giving a vigorous twist to the archaic notion that a woman artist’s place is in the realm of handicraft.

There is, certainly, an element of the homey in some of the pieces, even if it’s delivered with a wink. Heidi Clark’s furniture and mixed-media dress form are practical objects that are taken far away from the everyday with their jewel-like finishes, and Barbara K. Miller’s “Army Vest,” made from string and toy soliders, is anything but typical fashion. Similarly, Sibyl Graber Gerig’s “Mid-Winter Patterns” and “Northern Solitude,” both stiched and quilted fabric pieces, are not mere needlework, but more like paintings assembled with needle and thread.

Other artists represent the book arts. Gwen Diehn’s small books are precious objects, delicate and small, while Anne Binder’s “Trust and Devotion: Tale of the Crane Maiden” sits on the opposite end of the scale, its oversized dyed fabric pages adorned with bold calligraphy.

Some of the objects are difficult to categorize. Ruth Sinclair’s handmade paper sculptures hint at significant meaning — their titles, “Medieval Irish Reliquaries: IV,” “Sacred Scripture Bundles” and “Patriarchal Orb,” make explicit religious references — but it’s their tactile qualities that make them stand out. Painted, molded, embossed and infused with a patina of age, the pieces have a visual weight that’s out of line with the papery reality of their construction.

The rest of the show fills in any gaps in the stylistic spectrum, from the bright portraits of Emese Ronay Rivera to the fantastical miniature metal creatures of Judy Wenig-Horswell. It’s clear that the artists of the Indiana Women’s Caucus for Art have not spent the past 40 years in any one particular artistic pigeonhole, and this show is an enjoyable presentation of their work.

The Indiana Women’s Caucus for Art presents “Four Decades of Women in Art” through Sept. 16 at Goshen College’s Hershberger Art Gallery. Admission is free. Hours are from 8:30 a.m. to noon and 1 to 5:30 p.m. Mondays through Fridays. For more information, call 574-535-7361.

A reception that will include talks by several IWCA members takes place at 2 p.m. Sept. 16.