Wild at Heart: Selections from the National Museum of Wildlife Art travels to the Booth Western Art Museum this spring.

When the earliest artists created the first works of art, on cave walls and cliff faces, they depicted wildlife. The relationship between humans and animals has been drawn and re-drawn by artists from all over the globe ever since. In North America, the subject has been of particular interest as artists of European descent discovered the amazing animals and natural beauty of what was, to them, a brand new continent. 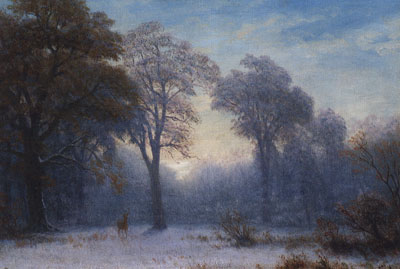 Wild at Heart displays the rich history of one of North America’s proudest art traditions, featuring highlights from the permanent collection of the National Museum of Wildlife Art. Instead of arranging the works chronologically, this exhibit groups the artwork into different regions – East, West, North, and South – corresponding to areas of the continent that have appealed to artists over the last century and a half.

The paintings and sculpture on display feature wildlife created by some of the finest historic and contemporary American artists, painters such as Albert Bierstadt, William H. Dunton and Bob Kuhn, as well as sculptors Edward Kerneys, Albert Laessle and Ken Bunn. Wild at Heart also features work by artists from France, Sweden, and Germany, providing a testament to the attractive nature of our wilderness areas and wildlife populations to artists from foreign countries.

Throughout the 1800s, artists such as George Catlin and William Jacob Hays headed West, beyond the frontier, to paint the wildlife and landscape for an interested Eastern audience. One of the West’s most famous chroniclers, Charles M. Russell, was known for his humorous take on the Western scene. His sculpture, The Bluffers, depicts a posturing bear and bison (the title piece indicate each may have a bark in mind instead of a bite). After the closing of the frontier in 1890, artists seeking untrammeled ground had to go farther into the backcountry in search of wild places. Carl Rungius began his career studying the landscape and fauna of the Wind River Range in Wyoming. The West has continued to be a mecca for artists, thanks to the spectacular mountain ranges, national parks, and the remaining wildlife population, which includes birds, bison, elk, deer, bear, pronghorn, and a wide array of smaller species. 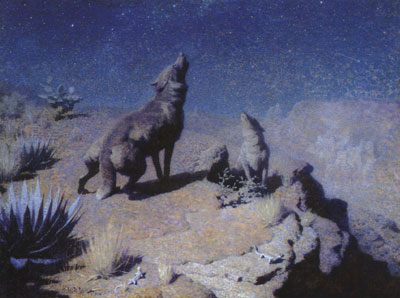 European immigrants moving across the continent soon discovered the splendor and majesty of the South and the Southwest. A group of painters called the Taos Artists Society, including William H. Dunton and Ernest M. Hennings, located themselves in this region to paint the beautiful Southwestern light and capture the remaining wildlife populations on canvas. Painter William R. Leigh also made the Southwest a recurring subject of his work. The South is a large geographical area with many regions where wildlife congregates.

As the American West grew more populated, large wildlife populations with untouched wilderness became more difficult to locate. Artists journeyed into Canada to Banff and Jasper national parks to locate subjects such as caribou, moose, mountain goats and bears. Carl Runigus led this migration in the early 1900s and was followed by a host of other artists including Belmore Browne, Robert Lougheed and Conrad Schwiering. Canada has produced some of the most renowned wildlife artists working today. Canada’s rugged terrain has continued to provide protected habitat for wildlife.

Beginning with explorer-artists and continuing with the best contemporary painters and sculptors working today, wildlife has been a consistent subject in American art. To early artists and patrons, wildlife represented a seemingly endless bounty of available natural resources. Where Europe had a proud cultural history, North America had amazing natural wonders, expanses of untouched land, and plentiful wildlife. 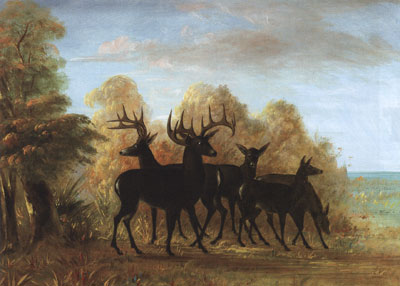 Today, wildlife art can be interpreted from a multitude of different perspectives. It can be seen as preservationist, conservationist, nostalgic, escapist, realistic, or simply beautiful in its own right. We, at the National Museum of Wildlife Art, hope that this exhibit helps viewers see the connections between wildlife and art in new ways and prompts further appreciation for the wilderness that remains at the heart of what makes North America exceptional.

Wild at Heart appears at the Booth Western Art Museum in Cartersville, Georgia, from April 11 through July 19, 2009. Previously, the exhibit has appeared at the Carnegie Museum of Natural History in Pittsburgh, Pennsylvania, the Rockwell Museum of Western Art in Corning, New York, and the Vero Beach Museum of Art in Vero Beach, Florida. After the Booth installation, Wild at Heart will appear at the Art Museum of South Texas in early 2010.