Veryl Goodnight explains her inspiration for this sculpture:

September 11, 2001 is one of the dates in history that we all remember where we were. I was in Jackson, Wyoming in a log cabin on Wilson Creek. My own reality seemed so twisted as I looked out at a bull moose crossing the creek with only a few yards separating him from the horror we were watching on the television screen.

A week later as we drove home to Santa Fe through Wyoming, Colorado and half of New Mexico, I was uplifted by the American flags displayed absolutely everywhere. I began searching for a meaningful way to portray the show of solidarity we were witnessing. A few months later I saw a brilliant little painting by my friend, Buck McCain, of an American Flag stretched out over a table as a woman mended it.

With Buck's blessings, I reworked his concept into a sculptural composition. Thus, "Mending the Flag" was born. Even though "Mending The Flag" was inspired by the solidarity of America after the September 11th attacks, it was my intention that the message be timeless.

I folded the flag very carefully so that only close observation would reveal the fact that the stars were placed diagonally rather than in rows. That change occurred, I believe, in 1959 when we gained a 50th state.

The message of the sculpture can be applied to any time in history when America has faced crisis, including this present moment.

Mending the Flag is featured in the artist's book, No Turning Back: The Art of Veryl Goodnight. 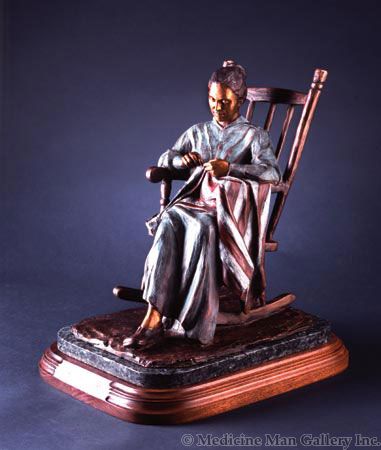