Quote from the artist about American Warrior from the 2011 Rendezvous exhibt at the Gilcrease Museum:

"American Warrior is a contemporary Northern Cheyenne chief, Ben Nighthorse Campbell. A genuine hero to the Native Americans, Ben Campbell earned the 72 feathers in his war bonnet as the captain of the United States Olympic Judo Team in the 1964 Olympic Games. Ben went on to excel in everything he has done. He was a winning breeder and trainer of quarter horses, is an outstanding jeweler, and he served Colorado, as a United States congressman and senator from 1993 to 2005.

When the Smithsonian National Museum of the American Indian opened in 2004, Ben was invited to show his jewelry in the inaugural exhibit. Ben's wife and daughter asked if I would create a sculpture of Ben on his favorite horse to accompany the exhibit.

Our friendship began in the 1980s as artists in a joint exhibit of his jewelry and my sculpture. I was thrilled to be able to sculpt my friend and simultaneously give him a portrait of the horse he had loved so much. Ben's classic Indian profile and the proud way he sat on 'Scamp' as Grand Marshall during the Rose Bowl Parade inspired the composition for American Warrior."

American Warrior is discussed in detail in the artist's book, No Turning Back: The Art of Veryl Goodnight. 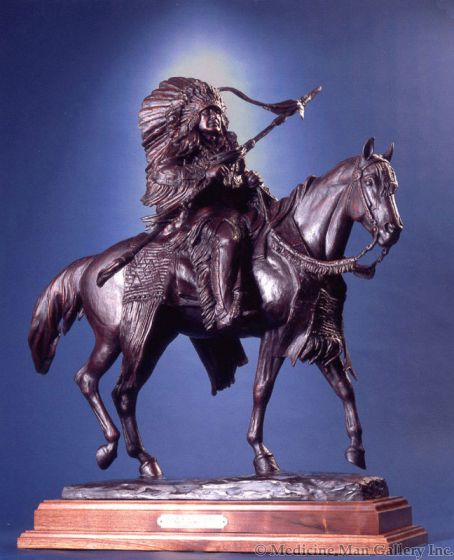