SOLD OUT. "The shallow, bronze bowl opens in a balanced tapestry of positive and negative space – a mirror of the profound dualities of our essence.

A five-petaled sacred flower blooms in the center as the Higher Essence giving birth to the marriage of opposites: masculine and feminine, light and dark, day and night, birth and death, yin and yang. The essence of the five-petaled sacred bloom is symbolic of that place when we realize it takes far greater energies to hold ourselves in bud, than it does to allow ourselves to bloom fully into all that we are intended to be. Its center, with meandering spiral, is the life journey.

Sacred Marriage bronze bowl by Carol AllemanFour obvious butterflies (two different species, representing the feminine and the masculine) represent relationship – one with another as well as the duality within each alone. Long recognized as symbols of new life, the butterflies are grounded on earth while fed and transformed from above. The butterfly, through its transformation, brings duality into balance and becomes a new, larger form of profound movement and beauty.

Seven (a divine creative number) doves in flight are the messengers of peace and movement through the meandering process of transformation and unity. As such common creatures, they are often ignored, inviting one not to overlook the common for extraordinary messages and peace-bearing gifts.

The meandering vines (the life journey and unending growth), weave without beginning or end, symbolizing the ultimate Divine blessing of the “sacred marriage” within us and with one another through eternity.

The edition size of 42 was chosen for the combination of the numbers four and two. Four represents wholeness and totality, the earth plane (the four seasons, four directions, quarters of the moon) while two symbolizes duality. Together they equal six, a number of perfect balance and harmony, signifying the union of polarities." -- Carol Alleman 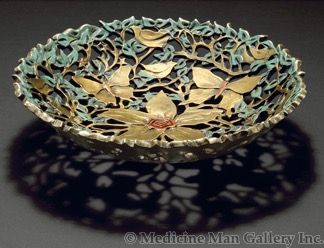