"My intention when sculpting Nature's Bounty, with twenty-five blooms of white clover, was directed foremost toward honoring the honeybee.

The white clover is indeed a favorite and a readily available (when we allow it to grow) source of excellent nectar and pollen for the honeybee. Who of us has not, as a child, searched countless hours for that rare four-leaf clover to treasure? (You can find one on Nature's Bounty!) As children we were yet to realize this vital plant was considered by many in the adult world to be a persistent weed. What is a weed, I pondered as I sculpted? According to dictionary.com, a weed is: "a valueless plant growing wild, especially one that grows on cultivated ground to the exclusion or injury of the desired crop; any undesirable or troublesome plant, especially one that grows profusely where it is not wanted."

The key words for me were valueless and growing where not wanted. The white clover is anything but a valueless plant; but often we seem to prefer the appearance of an artificially evenly green lawn. We forget to reflect on the value of what we are seeing and neglect recognition of all that may well be happening behind our limited vision in an ordinary moment. The clover does not interfere with the growing of grass; it is more often simply not wanted for its interruption of the visual green carpet.

The common three-leaf foliage of the white clover holds significance for me. The three of its foliage is symbolic of a life pattern in balance. Three represents, through various traditions, divine power: beginning, middle, end; birth, life, death; father, mother, child; and the trinity of Christian tradition in Father, Son and Holy Ghost. "Legend (dating to 1726, according to the OED) also credits St. Patrick with teaching the Irish about the doctrine of the Holy Trinity by showing people the shamrock, a three-leafed plant, using it to illustrate the Christian teaching of 'three divine persons in the one God.'[66] For this reason, shamrocks have definitely become a central symbol for St Patrick's Day. Nevertheless, the shamrock was also seen as sacred in the pre-Christian days in Ireland. Due to its green color and overall shape, many viewed it as representing rebirth and eternal life. Three was a sacred number in the Pagan religions and there were a number of "Triple Goddesses" in ancient Ireland, including Brigid, Ériu, and the Morrigan." (http://en.wikipedia.org/wiki/Saint_Patrick).

The uncommon four-leaf clover is considered to bring great luck. Commercially produced today (via genetic engineering) they are easily purchased particularly around St. Patrick's Day. Yet, four-leaf clovers do indeed grow naturally on the white clover plant; it is estimated that for approximately every 10,000 three-leaf clovers one with four leaves will appear. The smaller white clover plants represent likely the most important honey producing crop in the United States and an abundant source of pollen for bees.

The most important pollinator of the white clover is the honeybee. The world's honeybee population has been in an alarming decline for the past decade; and continues to decline today. In the mid-2000s a virus threatened the vibrancy of the life of the honeybee; and today Colony Collapse Disorder (CCD) presents the greatest challenge yet with its unique set of lethal symptoms. I hold a very deep and growing concern regarding the alarming rate of the honeybees continual disappearance (along with other bees and insects); and the yet inconclusive -or at least ineffective - results of the massive research completed surrounding CCD.

One author, Michael Schacker, in A Spring Without Bees (2008), suggests we have the answers, for the most part, to their disappearance yet we have been unable, as a society, to accept the evidence which would strongly indicate a critical need to change many of our ways of living. Schacker believes a major culprit to be our increased use of pesticides and our ever-increasing potency of them. His book presents an absolutely alarming, and very well documented collection of the history of their disappearance along with the research efforts and results. He also highlights the role of the EPA and its regulations and practices; as well as the role of major manufacturing companies of the many pesticides we use so freely today. It is clearly a book worthy of one's time and deepest reflection.

The honeybee pollinates about one third of the food we eat today - including fruits, vegetables, and nuts. Without these foods, our dietary intake would need to change dramatically leaving grave deficiencies. The honeybee truly feeds us through its relentless work as an amazingly intelligent and organized colony. I hope we are, collectively, able to wake up to the alarming cry of the honeybee and see in its disappearance the grandest of requests for us to re-evaluate, with very new eyes, our way of tending our natural world and our changing farming practices. I believe we can truly no longer afford to make decisions based primarily upon financial gain or ease of labor over the value of a healthy source of nutrition and a balanced, non-toxic and sustainable ecosystem.

The honeybee builds combs that are flat, vertical panels of highly uniform six-sided (hexagonal) cells. Six, is the number of absolute harmony. I reflected upon the wonderful mystery of how these seemingly tiny insects hold the intellect to build such precise cells in absolute uniformity and in the form of perfect harmony. This felt to me to be an immense and wondrous gift and inspiration. They clearly point the way toward building harmony - collectively. The foraging bees return to the hive once finding an excellent source of pollen and nectar. Using the amazing and intricate waggle dance, they share the precise location of this excellent source with the other bees in the hive. I pondered how different our communities might look if we too were to be inspired to share our greatest treasures, as we discover them, with all others in our communities that we might work together to best feed ourselves and nurture others?

The honey bees' sense of authentic partnership and community is richly inspiring. They simply trust the pure nature of sharing in the richest sense of community. Symbolically, the bee is noted in many traditions as carrying a heavenly import. J.C. Cooper, in the Encyclopedia of Traditional Symbols (1978) suggests: "Bees often represent the stars and are also winged messengers carrying news to the spirit world; telling the bees of a death or important event, is to send a message to the next world or the spirits." Could the bees be communicating with the heavens - the spirit world, indicating we are perhaps well out of balance in our care of the natural world?

In the Christian context, the bee hive is symbolic of the church - and in our world today, is the traditional church collapsing in many ways right along with the hives? Have we been blinded to seeing with clear vision the vital essence of both? The Celtics propose the bee represents secret wisdom coming from the other world. Could we perhaps learn much from their habits (secret wisdom) of highly organized partnership, harmony and communication? Jack Tresidder, in his book 1001 Symbols; suggests that few if any creatures have symbolized more ethical virtues than the bee. "Apart from being associated with many divinities, its industrious habits and social organization were a gift to the writers of homilies.

The Christian monastic community was equated with a beehive. ".The 12th century mystic Bernard of Clairvaux likened the bee to the Holy Spirit." Nature's Bounty is presented with the hope that it will stir, alongside the deep beauty it holds, a highly energetic nudge for each of us to truly consider with new awareness, the manner in which we are engaging with nature - and particularly in regard to the vanishing honeybee. There are many avenues each of us may choose to participate in creating a harmonious balance that will serve and sustain the natural world and ourselves at once (see attached: What You Can Do).

We are the stewards of this world - the honeybee is signaling to us for our deeply renewed attention - we are moving away from the balance of intended goodness and nourishment. The edition size chosen for Nature's Bounty is numbered while unlimited - reflecting a hope for an unlimited and infinite appreciation and honor of the honeybee and its gifts to us. The companion poetry contains twelve stanzas - an elder or tribal number to me. We are called, I believe, to act in ways that will empower our entire tribe - our entire global community.

There is only one very, very small honeybee on the vessel - easy to miss without careful observation - mirroring how very easy it is to miss the current status of the honeybee and how easy it is to miss noticing the honeybee with any level of appreciation or attention. The delicately winged, tireless, golden honeybee is calling to us in a profound manner. This tiny, wondrous insect, with its 6900 lenses in its eye to SEE so clearly, with its character of being a member of one of the most highly organized and complex societies in the animal kingdom is taking flight - perhaps soon never to return. May we take flight with them in bringing practices of life sustaining harmony and authentic community into our lives; and may we truly awaken and be tenderly reminded to live in manners which will ultimately be embracing and sustaining for Nature's Bounty. 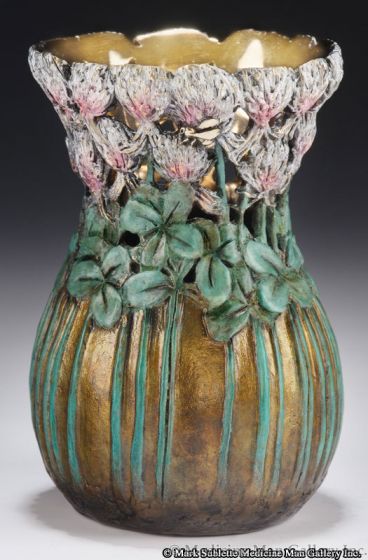