State of the Art: Arizona

State of the Art: Arizona (excerpt)

The vast Southwest desert landscape of Arizona offers artists a pristine backdrop for producing new works. Collectors shouldn't be surprised by the concentration of artists and galleries that call this state home. Artists such as Bill Mittag, Darcie Peet, Karen Petrovich, Steve Atkinson, and Suzanne Schmaltz provide collectors seeking new works from this region a vast range of styles and subjects.

The Desert Caballeros Western Museum hosts a number of important exhibitions throughout the year, including the annual Cowgirl Up! Art from the Other Half of the West, which celebrates women artists of the West. Other major annual shows include The West Select at Phoenix Art Museum, which brings together loyal local and national collectors and artists for festivities and sales. The City of Litchfield Park hosts the annual Native American Fine Arts Festival, spotlighting a new theme every year, and the Grand Canyon Celebration of Art hosts a unique plein air event - right on the Grand Canyon's rim. Celebration of Fine Art, which provides 40,000 square feet of pop-up studios in Scottsdale for artists to temporarily make Arizona home while they make art, will again take place in 2013 from January 12 through March 24. This last November 2012 also saw the inaugural Fall for the Arts hosted by The Legacy Gallery, which featured 30 artists in a quick draw paint out and auction along Main Street in Scottsdale. Participating artists w ill look forward to future dates as the event is already in the works for 2013. The following pages highlight the superlative artists, galleries and festivities taking place in "The Grand Canyon" state. 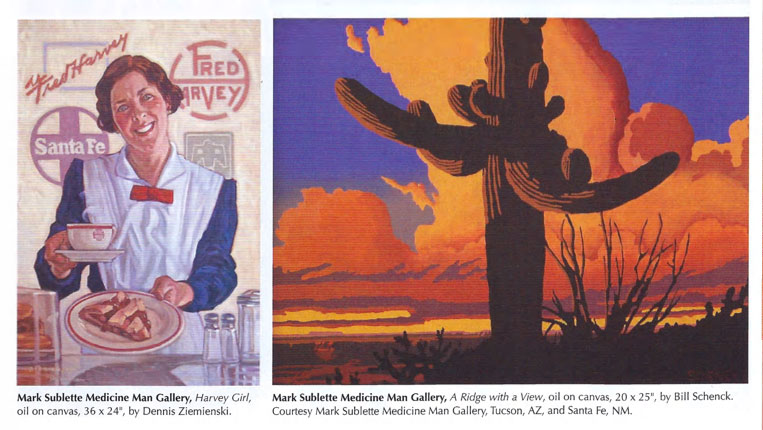 Mark Sublette Medicine Man Gallery is known for its Native American art and Western painting and sculpture. The gallery specializes in the life work of famed Western painter Maynard Dixon, legendary San lldefonso potter Maria Martinez, works by the Taos Society of Artists and the early Santa Fe and Taos art colonies, and nationally acclaimed Southwestern painters and sculptors. Medicine Man Gallery carries a large selection of Navajo rugs and blankets, Pueblo pottery, Southwest and California baskets, Hopi and Zuni kachinas, old pawn jewelry, and beadwork. The new year boasts a great lineup of artists and shows including Dennis Ziemienski who will be featured in Fred Harvey and the American Southwest, January 11 to February 15, and Young Guns: Three of the Nation's Top Western Artists Under 40 featuring paintings by Glenn Dean, Josh Elliott, and Logan Maxwell Hagege, February 8 to March 7. In addition, Merrill Mahaffey will be signing his book celebrating his life's work and exhibiting new paintings on March 8; new paintings by Mark Bowles will be exhibiting April 5 to May 5; and Bill Schenck will sign his book, Schenck in the 21stCentury, on April 27 alongside an exhibition of his new paintings.

"I’m excited about the current art market. We have just opened a new gallery in Tucson, and I feel confident about the upcoming year's prospects. In Tucson, there is robust activity in the housing market, which correlates well for those of us who need new blank walls to keep our artists happy." - Dr. Mark Sublette, President / CEO, Mark Sublette Medicine Man Gallery, Tucson, AZ, and Santa Fe, NM