Contemplative landscape painter Walt Gonske was born in Irvington, New Jersey in 1942. As a small boy, he liked to draw and copy comic strip characters in his idle time. Walt graduated from the Newark School of Fine Arts and went on to serve six months in the Army Enlisted Reserves. Walt also worked at several advertising agencies in New Jersey, for a number of years. Later, at the Art Student’s League, while studying with famous illustrator Frank Reilly, Walt established his strong foundation in the basics of drawing and painting. It was at this time he also discovered a springboard into the world of men’s fashion illustration. Walt moved to the City in 1967 and began freelancing as a fashion illustrator. Eventually, the field of fashion illustration transitioned to photography, so he decided it was time to move on to something new.

In the winter of 1971 Walt flew with his parents, to New Mexico to visit his sister who was working in the Taos Ski Valley. While he was in the area, he decided to investigate art galleries in Taos and Santa Fe. Enthusiastic, and inspired by the art he found in these galleries, he began to imagine what it might be like to live in, and paint the landscape of New Mexico.

Walt began taking photos of the New Mexico landscape and created watercolors based on these photos. He sent his paintings to his sister, who was now living in Albuquerque. She approached a local gallery that accepted the pieces on consignment. It wasn’t long before Walt received his first check totaling $66.00, a share of his first sale. Shocked by this, he remarked “Holy smokes! A fine art check!”

In 1972, at the age of 29, he headed West to pursue his passion of landscape painting. Once he settled in Taos, and began painting, he was compelled to shift from watercolors to oils to better reflect the intensity and light in New Mexico. Walt became a member of the “Taos Six” group of painters, which helped revitalize the Taos art market in the early 1970s.

Walt’s landscapes are not limited to Taos. He also created market scenes, churches of Mexico, Portugal, Italy, Guatemala, and China. Walt has said that he “interprets nature, but does not attempt to reproduce it.” He says he approaches his painting “empty of preconceived ideas about how a piece should turn out. It is a different way of thinking. A Mindshift from repeating what I already know. It is to allow the unknowable, creative spirit to come through.” His images are always completed in just one sitting and meant to captivate the viewer to lean in for a closer look, by using beautiful, rich color, loosely applied to the canvas in nearly abstract compositions. It has been said that he is “a landscape artist whose paintings delight our eyes and ignite our memories, and inspire fresh visions.”

Having been frustrated by the limitations of inclement weather during his “Plein-air” painting, inspired by the 19th century French Impressionist’s sense of painting outdoors, Walt customized a Ford truck into a “paint mobile”. His creation appeared to have a camper on the chassis of a Ford pickup. The inside has been altered to have a swinging table so that he can get a view from the side or back windows. The table height can be adjusted to accommodate the 6’2” artist. Instead of having a bed above the cab, there are two large cupboards used to store stretched canvases in his most often used sizes, 30”x44” and 40”x44”. The truck is also equipped with a portable heater for painting in the winter months. Having his custom “paint mobile”, he goes on painting trips to California and Colorado, or wherever the road takes him.

Some of his numerous awards are:

Walt Gonske’s paintings are exhibited in many museums around the country, including:

Walt completes only one hundred paintings a year, so as to maintain their emotional authenticity. He can hardly create fast enough to meet collector demand.

Today he still resides on the same two acres north of Taos, that he purchased in 1979. 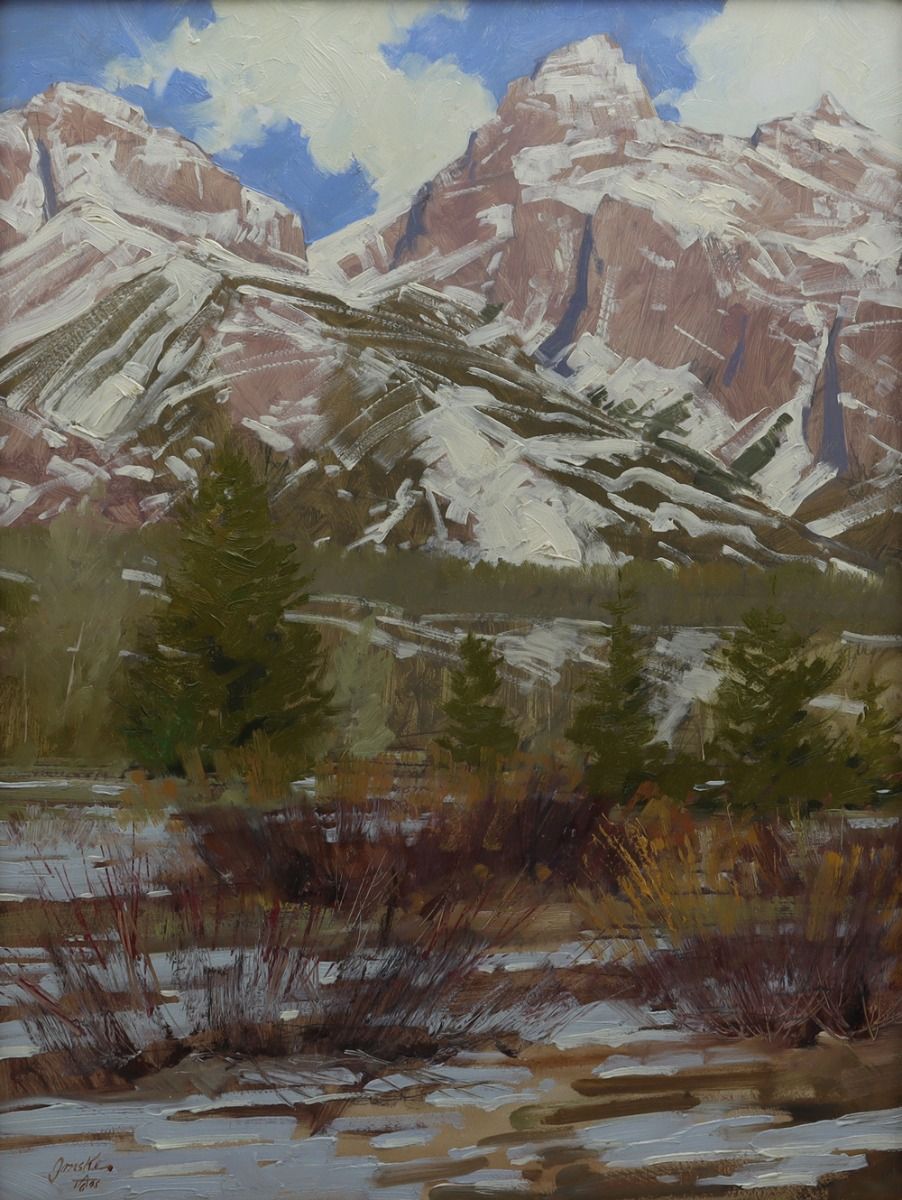