By Christy A. Vezolles, AM 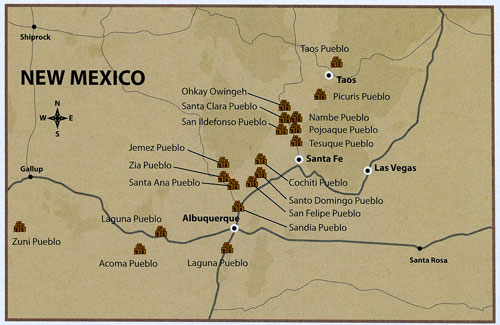 "It really spoke to me," is a phrase often heard when a passionate collector explains a recent purchase, be it a polychrome jar or a painting.

What if we were to listen closely to the voices of historic Pueblo pottery? Which language would be spoken? Would the voice be young or old, male or female? What stories would be told?

Perhaps surprisingly, the Pueblo people of the Southwest do not all speak the same language. Of the 20 pueblos in New Mexico and Arizona today, there are six basic languages, some closely related, others no more so than German is to Italian. The same held true in historic times as well.

Regardless of the language, one would likely hear the gentle voice of a woman, perhaps lilting with the vigor of youthfulness, or the wavering voice of a mature matriarch. Most pueblo potters throughout the centuries traditionally have been female. Although men too have made pottery, their role traditionally has been related to digging clay, decorating and firing the pots.

Locally dug clay would be refined and impurities removed that might cause inconsistencies, cracking or breaking in the firing. Typically, children would observe their mothers carefully constructing ceramic containers from coils of clay. Large, rounded forms were used for storage of water, grains and the like. Smaller, lighter jars were made to carry water. From their mother's example, the girls would begin forming rudimentary pots at an early age, perfecting their skills as they matured, and continuing throughout their lifetime. 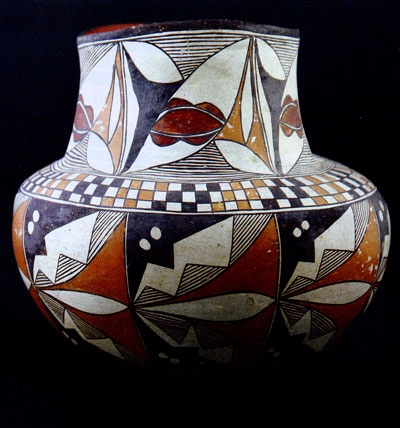 Perhaps the voices of the pots would regale the listener with descriptions of the rugged beauty of the homelands of their makers, near the upper Rio Grande, which runs from southernmost Colorado to the Gulf of Mexico. In this area lie the fertile fields, craggy cliffs, majestic mountains and sweeping vistas that define the Southwest n its most breathtaking splendor. Throughout the north-central region of what is now known as New Mexico, the ancestors of the present-day Pueblo people were scattered in small, self-governed villages. To the west, in what has become Arizona, Hopi villages were perched high atop the windswept mesas and at bases below near their farmlands.

Although not without challenge, life was primarily peaceful as these indigenous peoples subsisted by farming, hunting and trading with one another. They lived in mud-brick or adobe homes, some resembling multistory apartment buildings. These tranquil villages or pueblos were thrust into a traumatic transition about 1600 by the arrival of the Spanish, marking the beginning of the historic era.

One wonders if the Pueblo jars or ollas would speak in hushed fearful tones about the coming of the conquistadors, the harsh conditions under Spanish rule, and the European-introduced diseases that ravaged them, the denigration of their customs and prohibition of their traditional religion.

Perhaps the voices would proudly proclaim victory in the Pueblo Revolt of 1680, when, led by the great Tewa religious leader Po'po, the people banded together to drive the Spanish from the Pueblo lands. The victory as short-lived and the Spanish returned 12 years later, resuming severe control. The re-conquest of the Pueblo people was deemed complete by 1700. The defeat led to the establishment of villages in much the same distribution as they are found today. While northernmost Taos and Picuris Pueblos typically manufactured plain-ware of glittering micaceous clay and a number of the Tewa Pueblos turned to producing red and black wares, pottery-making stopped or declined at some villages about this time. 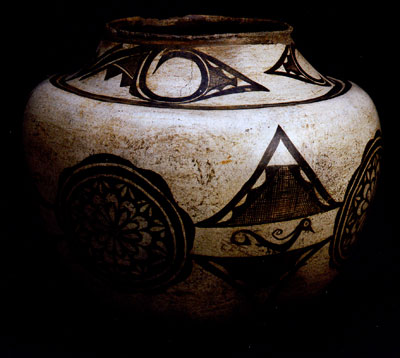 However, in the Tewa villages of San Ildefonso, Nambe, Pojoaque and Tesuque, at Keresan pueblos of Cochiti, Santa Ana, Zia, Acoma and Laguna, and further west to Zuni and Hopi, polychrome wares - pottery with more than two colors - were made in abundance. Mineral and vegetal pigments were used to paint designs, typically red and black against paint designs, typically red and black against white or cream slipped clay backgrounds.

New styles began emerging that set a new standard for quality and are considered to be among the finest Pueblo wares ever made. This signifies the beginning of the Classic Period, the golden age that extended from 1700 to 1760. Jars became more artistically sculptural, including flexures - sharp angles or strong surface curvatures - flaring rims, and other features. Classic Period jars exhibit a pronounced, low, mid-body bulge. The enlarged mid-section that overhangs a sharply angled, keel-shaped, red slip-painted underbody, with mid and upper body decorated with panels of patterns within framing lines.

A litany of voices is heard in the varied polychrome designs that flow across the surface of the jars. Widespread use of assorted sacred feather motifs occurs on wares from virtually every village. Adherence to commonly held Pueblo traditions and mythology is evident in the repeated clouds, suns, floral motifs and birds. A line break, often referred to as a spirit path, said to allow the release of the spirit of the pot or its maker, is evident throughout Pueblo wares, as it has been since the 12th century.

The ollas speak explicitly about the influence of Spanish design beginning in the late 1700s as the market for Pueblo ceramics was increasingly for trade rather than domestic use. The polychrome vessels made between 1760 and 1820 lost many of the sculptural subtleties that distinguished the Classic Period and evolved into a more rounded body with a defined neck. In general, designs became heavier, more loosely executed and structured; framing lines were used with less frequency. After 1800 new designs such as medallions and free-flowing feathers and volutes - spiral motifs - emerged.

The Santa Fe Trail ran from Missouri to Santa Fe, through the heart of Pueblo country. Between 1820 and 1880 it was a key trade passage between the U.S. and Mexico - and then became U.S. invasion route during the Mexican-American War, which resulted in the ceding of Santa Fe de Buevo Mexico to the U.S. in 1848.

As interaction with the Mexicans and the Americans increased, so did influence of these cultures on the manufacture of Pueblo pottery in this transition period. The jar with a rounded body and distinctive neck now also exhibited a high shoulder. Changes came more slowly at the pueblos of Zuni and Hopi, owing to their isolation, but for most potters, trade with the foreigners as well as between Pueblos resulted in a whole new visual lexicon.

Expressed in colored slips, a profusion of realistic and stylized birds, animal figures, foliage and rainbow arcs appeared along with geometric shapes and hatching. Originating with the Zuni in about 1700, the handsomely abstracted rain-bird motif was used by most Pueblo potters by this time.

By 1880, the newly completed railroad brought a steady stream of tourists from the East who were eager to buy pottery to take home as mementos of their visit to this exotic land and its peoples. In addition, collectors and anthropologists interested in documenting and reviving old forms and motifs exerted influence on the Pueblo potters.

The railroads also brought large quantities of inexpensive metal pots and pans, which were readily adopted for daily use by the Pueblo people. Pottery became less utilitarian. Serviceability became secondary to beauty as potters transitioned from making goods for their own use to making polychrome wares with a commercially desirable aesthetic.

Transcending all else, there has remained one constant. Regardless of time period, physical form, or painted iconography, in all likelihood the gentle timeless voice of the olla would divulge a sense of the spiritual quality of the vessel. More than simply the bearer of the commodities of water and corn, in its time the graceful jar held the essence of life - literally and figuratively - providing not only physical but also spiritual sustenance for the people. The sacred and secular are interwoven in Pueblo life such that the voice is one and the same. Indeed, there is a certain spirituality associated with every aspect of the creation and use of Pueblo pottery.

In addition to a harmonious chorus of voices, each village's pottery has a distinctive tenor and vernacular in the decorative motifs that define its own characteristic style. The visible expression of the culture was also defined by the time period in which it was produced.

The historic polychrome pottery of the Pueblo people of the Southwest gives voice to a culture's expression of the highest artistic achievement. In a collection of Western art it commands attention, adds dimension and lends authenticity. The voices from ancient forms that whisper to collectors, speak clearly to the descendents of their makers, maintaining tradition and encouraging fresh expression. Regardless of time period, the common language is beauty.